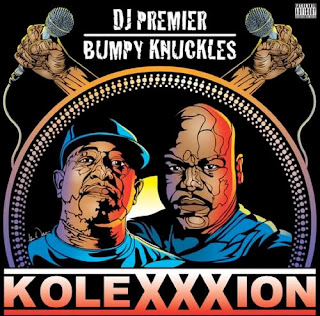 Now we're only roughly a month away from The Kolexxxion, the looooong-awaited full-length collaboration between legendary emcee Freddie Foxxx and super producer DJ Premier dropping March 27. The duo first collaborated in 1997 on two singles from OC's  fantastic "Jewelz" and a stand-out joint on M.O.P.'s "First Family 4 Life". One year later heads really started taking notice to the rapper due to Foxxx's agressve and memorable verses Gang Starr's masterpiece "The Militia". A few years down the road, Preem once again laced Foxx on four tracks, collectively, on Bumpy Knuck's two solo albums "Industry Shakedown" and "Konexion". Premier supplied the four illest cuts on both records, further cementing this duo as one of hip-hop's most powerful. Since then real hip-hop heads have been fiending for a full-length collabo between these two thugged-out gentlemen, and on March 23 the wait is finallt over.

An interesting fact is that Bumpy Knuck's never have Premier custom made beats for him but rather spit over beats rejected by others, making them nothing short of his own. The seventeen songs album is a collection (hence the title) of new and previosuly released music - whether mixtape leaks, non-album 12" singles. Now that's all great to have them in great quality, the only problem I have is the inclusion of "P.A.I.N.E."; I don't see the point of including an already releaseed Preem/Bumpy track from one of Foxxx'ss official album. Oh well, this is obviously an instant buy. The latest leak from the album is track #2; "Shake the Room" with Flava Flav, a radio rip courtesy of the DJPremierBlog (who also supplies the link below).


BUMPY KNUCKLES - "SHAKE THE ROOM (Ft. Flava Flav)
Posted by lost.tapes.claaa7@gmail.com at 2:45 AM