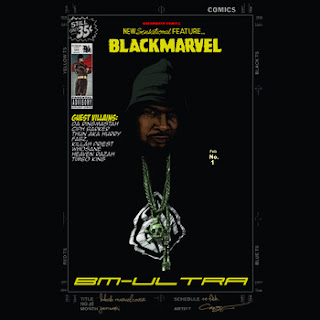 Black Marvel might not be the most recognized producer out there but he's one of the super underrated beatmakers in the Amsterdam group Godz Wrath. Aside from Black Marvel, rhe trio currently consits of Jordan River Banks and Ciph Barker. Together they have produced some of the finest music on such amazing releases as Killah Priest's "The Offering", Hell Razah's "Renaissance Child" / "Heaven Razah", Shabazz the Disciple's "Hood Hopera" / "THUG Angelz" and the "Black Market Militia" project. And they always bring that quality so when MOD The Black Marvel is now releasing his first solo album you can count on it being an interesting release.

A little suprisingly, "BM Ultra" features not only MOD behind the boards but kicking some rhymes while the production is handled by the entire Godz Wrath crew. Guests include Ciph Barker, Thun/Hurry Fubs and most interestingly the posse cut "Room 308" featuring the entire Maccabeez fam (Killah Priest, Hell Razah, Timbo King) and New York emcee Whosane, you can check that out below while you can stream the entire album here or download it for €8.99. To cop a CD version head over to Black Marvel's official site.