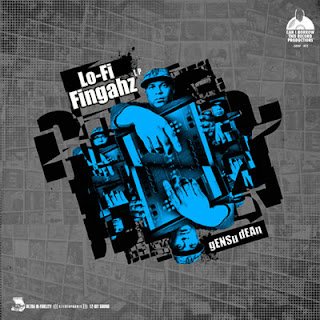 Underrated producer Gensu Dean and his trusted SP1200 has been providing beats in the background for years now but the majority of hip-hop heads might not even know who he is. At least not yet, but after his recent signing with Mello Music Group and the recording of his official solo album "Lo-Fi Finghaz" that is hopefully all about to change. Dean makes true shool hip-hop with a modern twist that should be right up the alley of readers of this blog and similiar sites. The album hit stores in physical and digital copies on February 28 and you can pre-order it now from Amazon or iTunes. You can already now stream the album in full and purchase it straight from the label, head over to Mello Music Group's "Lo-Fi Finghaz" site.

"Lo-Fi Finghaz" is really a really dope album, I have rarely heard an average beat from Dean and the tracklist is full of great guest artists. We already heard the incredible Large Professor blessed "Forever" and now the follow-up single, "Yen", features Roc Marciano and is another promising cut. Other emcees rhyming over Dean's beats on the LP include DMC, Sputnik Brown, Brand Nubian, Roc Marciano (twice that is), Prince Po, Blame One and many more. While listening (and hopefully placing your pre-order) make sure to read this great article about the making of the album conducted by Chris Moss over @ Al Lindström's place.