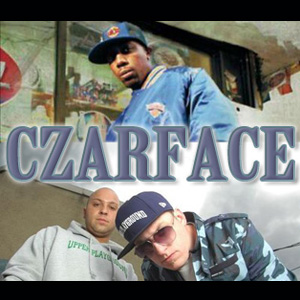 For some time now rumours about Wu-Tang's super lyricist Inspectah Deck joining forces with Esoteric has been floating around the web. Now this project is definitely soon to become reality and it seems that Esoteric's traditional producer partner 7L will also be involved in the album which will be released under the group name CZARFACE (weird, I know). Rebel INS is one of my favorite rhymers of all time but besides the classic Clan album he has never been able to fully deliver a truly solid solo album if you ask me. He absolutely killed his latest LP "Manifesto" as far as the vocal part goes but except for a few beats ("The Champion", "Tombstone") it was real lackluster.

With CZARFACE we'll get to hear The Rebel rhyme over the talented 7L's production with additional contributions by the one and only DJ Premier (something fans have been fiending for since "Above The Clouds") and cameos from Roc Marciano, Action Bronson, Mr. Muthafuckin' eXquire and Large Professor. I really hope the latter gets to supply a beat for the project as well, considering he's been truly on fire lately. But back on topic, I uploaded the classic 7L & Esoteric '99 single "Speaking Real Words" which was the first time they duo worked with Inspectah Deck; a classic song mixed by the one and only Marley Marl.