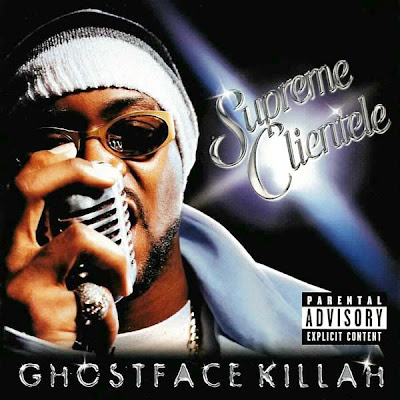 In the early '90s Wu-Tang Clan was already one of the absolute top crews in the modern hip-hop landscape but when Raekwon dropped his "Only Built 4 Cuban Linx Niggas" in '95, its mafioso infected dreams of the big bucks, fly Shaolin slang and references to future embraced brands like Cristal truly changed the game. To me, it's still the top album ever released, and besides Raekwon's name the cover also bore the under title "guest starring Tony Starks A/K/A Ghost Face Killer". In fact Ghost appeared on no less than fourteen of the album 17 or 18 cuts (depending on which version you bought) and it was his chemistry with The Chef and RZA's futuristic production that made the LP the instant masterpiece it was and still is. The following year, Ghostface once again hooked up with Rae and RZA and released his own debut, "Ironman", an equally impressive project. Despite the three main characters being the same, RZA's samples were now instead steeped in the '60s and '70s soul and funk that the young Dennis Coles had grown up on (including Al Green, Bob James, Jackson 5 and Sam Cooke). If you never heard Coles before, after listening to his debut front-to-back you'd be left with the feeling that you know Ghost and his persona, ideals and history. Classics like "All That I Got is You" was a heartfelt dedication to his mother while also dealing with the hardships of his youth, "Camay" told a taseful love tale while the super misogynistic "Wildflower" saw a furious Ghost spew hate over a cheating ex-girlfriend with no spare on the profanity. Together with Rae, both their two albums was additionally filled with fantastic storytelling raps that would make Slick Rick and KRS-One proud and helped cement the pair as one of the finest rap duos of all time.

After RZA completed his five year plan for the Clan with the release of 1997's superior multi-platinum "Wu-Tang Forever" he took a step back from producing the 9 generals solo music to focus on what he called his "c-artists"; peeps like Killarmy, Cappadonna and Sunz Of Man. Instead he assigned Divine or Power as the main executive producers for Clan members various projects. This allowed the Wu members to release more music rapidly and with more personal input. This resulted in releases between '98 and '99 from RZA, Method Man, GZA, Ol' Dirty Bastard, Inspectah Deck, Red N Meth, U-God and Raekwon. While the majority of these projects were far from bad, even die hard Wu fans were agreeing that something was missing from them all and that they didn't live up to the high standards set by the Wu-Tang releases between 1992 and 1997. What was missing was clearly RZA's input, guidance and vision; on an average he produced one to three beats per project (save for RZA as Bobby Digital's "In Stereo" which could  arguably be considered a part of the first round of RZA laced solo albums; although  it was way ahead of its time when it first hit stores and caught a lot of flack).

By early 2000, the only Wu member to not have dropped a solo over the last couple of years (save for Masta Killa) was Ghostface Killah, much due to a six month bid on Riker's Island. Once he was released, he hit the studio to record "Supreme Clientele", an album that both Ghost, RZA, Divine and Power collaborated on and understood the extreme importance of. I remember hearing the Raekwon featured single "Apollo Kids" and feeling it was one of the best Wu songs in years and when I picked up my copy of Ghost's sophomore LP on the day of its release, I, like many others, knew that The Wu was back in full throttle. The album was totally cohesivem perfectly sequenced, had clever skits and followed a theme of a super hero on a mission to save the world; a metaphor for Ghost's importance in bringing back the Wu legacy with a classic worthy of the early '90s Clan solos. While RZA didn't prouce the majority of the beats, he and Ghost had a hand in the mix and final outcome of every track which gave the project it's unique sound. Instead of having the beatmakers produce their record in the studio, RZA and Ghost picked out beats from the likes of Beatnuts' JujJu, Carlos Broady, Allah Mathematics and Phantom Of The Beats and produced and arranged everything on the LP much the same way a rock producer would've done it. This is a very important part to the LP's success. Another equally impressive feature of "Supreme Clientele" was Ghostface's own lyrical performance, displaying a totally unique style of emceeing that hasn't been duplicated neither before or since. I even heard of an English teacher at an American university using some of the verses on the album as poetic art material for analysis. The stream-of-consciousness style Coles used here could be interpreted as jibberish by someone, as high art by another while a third party would chalk it up to twisted ghetto slang. What put the icing on the cake and truly made it one of the best rap performances of all time was the way Ghost spat his lines though, his flow on every verse delivered to perfection.

Epic, Ghost's label for his three first albums were masters at screwing up tracklists and denying sample clearances. This was especially evident on 2001's "Bulletproof Wallets" which could and should have been GFK's third classic in a row if it wasn't for the label. It's hard to believe that an LP as close to perfection as "Supreme Clientele" originally faced some similiar problems, resulting in the released version being slightly different than how it was first intendended. Luckily for fans, the original version was available for a limited time period on first pressings over in Canada. Which of the two versions is the better can be debated but it's unquestionably very interesting to hear this slightly different take on such a familiar classic. This version features 14 tracks rather than the retail's 21 as the skits appears after a track's song; the Ironman cartoon intro and outro is however entirely dismissed here and the sequence is slightly altered. The main differences though is that rather than the atmospheric RZA remix of "G-Dini" appearing on all other editions, here we get Ghost and Superb ripping the much more sinister and hard hitting Blaquesmiths beat previously used for "Bastards" (The Ruthless Bastards joint on "The Swarm Vol. 1"). Further, "Child's Play" features an extended vocal outro but RZA alters his beat by keeping the George Jackson organ sample on a steady loop while leaving out all the breakdowns and alternations which to me always helped elevate the song to the next level. The biggest and most important difference between the two editions however is that all but the Canadian's missed out on the absoultely brilliant "Wise", a vintage Ghost song with raw emotions on full display that works as a heartfelt tribute to his fallen friend and comrade Wise (Killarmy's original manager). The track is built on the classic Dramatic's song "In the Rain" but not only does it use a sample of the beat but it actually features production work and guest vocals by the original artist. This joint is to me a pivotal moment on "S.C." that every Ghost fan owes it to themeselves to hear, its long honoring verse can be likened to that on "Impossible" (which is thrown in here as a skit for good measure). So, which version is the better? Check it out below, TURN IT UP and decide for yourself!

GHOSTFACE KILLAH - "SUPREME CLIENTELE" [Canadian]
Posted by lost.tapes.claaa7@gmail.com at 5:17 AM