Between 1993 and 1995 House Of Hitz was pumping out boom bap classics like there were no tomorrow, with main producers Marley Marl and K-DEF dropping hot singles and albums for everyone from LL Cool J, Lords Of The Underground, Intelligent Hoodlum, Da Youngsta's, Monie Love, Heavy D, and many more. In 1995 two limited 12" singles of previosuly unreleased songs from those sessions was released over the coming years. World Renown was the perfect House Of Hits duo as they brought that raw hip-hop, and the singles had some serious underground hit potential. '94's "How Nice I Am" quickly became a mixtape favorite, and the funky K-Def opus still remains a DJ favorite to this day. With a strong undergroun buzz, the track was soon followed by another 12" single, the smooth "Come Take A Ride". The doule-A side single featuring the best of both the East and the West's respective popular sounds of the day as Marley Marl's original mix oozed of traditional funky breakbeat magic, while the remix, provided by K-Def and Blackcat, was fittingly titled the West Coast Revibe and incorporated elements of moog synthesizers, heavy bass line and intense drum programming that was the perfect version you'd want to hear when cruising on a hot summer day.

Both singles were released on Warner Brothers Records, and due to the buzz surrounding them, the duo was around early 1995 given a one-album deal contract with the label. World Renown was a rhyming duo consisting of hip-hop royalty, at least when taking into account their family ties. The project which was self-titled, included interludes, and was given a Warner Bros. catalouge number (WB.4/2-45715). Unfortunately, as so many lost mid'-90s albums that border on classic material, the LP, despite being completed and given a few ads in various hip-hop magazines, "World Renown" remains shelved to this day and it's doubtful if that will ever change. New Jersey emcee Seven Shawn is the cousin of producer K-Def, while emcee John Doe of New York had the same bloodties to Marley Marl. Not suprisingly, the pair started recording their self-titled album at The House Of Hitz, in th the good company of production partners Marley, K-Def, and friend and newcomer Blackcat. At least for some of the tracks the mixdown was handled by Frank Heller, with the executive production asssigned to Marley Marl, Benny Medina, Peter Edge, and Nicole Bernard. The album was completed, with Shawn, Doe and their producers completing at least sixteen tracks.

Some songs have been harder to come by than expected, but thanks to those who ripped the second, even rarer promo LP (peace to my brothers over @ the T.R.O.Y. forums), I have here managed to collect all known songs recorded by the group around this time; adding both A-sides of the singles, using all exclusive tracks from both separate promos, fixed the sequence after my own liking, and even added a quite rare bonus track produced by 'Def to close out this fantastic boom bap set on a more sombre note. It's a true shame that this project never got an official release considering how many dope beats, rhymes and song structures are all over this; back in the mid-'90s Marley and K-Def worked brilliantly together and "World Renown: The Album" might have been the last full LP they worked on together as a production team. Hopefully, this project will once be picked up by a label like Traffic Records and given the proper release it rightfully deserves, fully mastered and with extensive linear notes though it's highly unlikely. But until that day, and if it ever comes, follow me back to the mid-'90s, turn up the volume and enjoy the talents of Seven Shawn, John Doe, Marley Marl, K-Def, and Blackat. I know I will! 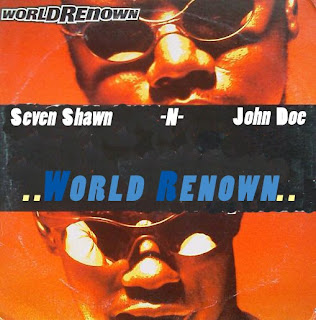 WORLD RENOWN - "THE ALBUM"
Posted by lost.tapes.claaa7@gmail.com at 4:13 AM