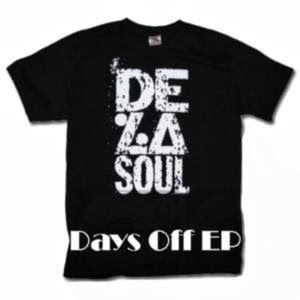 De La Soul has really grown into one of my favorite groups over the years, and today the albums which I originally had a hard time coming into have become cherished treasures of my collection. I Think their entire catalouge is exceptional, and I'm glad to have been able to catch them live on stage. As much as I've listened to every long player they have dropped it's a great feeling to find something new from the power trio - and such is the case with their 2004 EP "Days Off" which I'd like to present y'all with today. Sent out by HipHopSite.com as a free bonus item to customers who bought their, as of today, latest album "The Grind Date", the EP has also been pressed up on 12" EP.
The 5 track set plays as the perfect companion piece to "The Grind Date", even including two very different remixes of the albums title song. The remix by singer/producer Wale Oyejide lows the original out the water in my humble opinion and is straight up marvellous. Placing Pos and Dave's lyrics about making their way in the world over a deep, moody bass track filled with jazzy horns, reminiscent of Fela Kuti's world. "Do The Damn Thing" has a similiar vibe, built around a beautiful acoustic bass riff that explode when Pos sets it off and a jazzy piano is added to the mix to great effect. Next up is the old, but pretty much unreleased classic "Stay Away", which marks the only time De La Soul has crossed paths with Mr. Pete Rock - and the fact that it actually lives up the expectations is something of a marvel in itself. Probably recorded somewhere around 1996 as Rob-O kicks the same verse as on "Center of Attention", it's a shame it never got a wider release. Track #4, "Hold Tight" is another definite winner, carrying a real nice, simple but thumping sound that's stripped down to the bare essentials, placing the emcees at the forefront. Rounding things off is another remix of "The Grind Date", this one by a production team called Inhumanz that have released some pretty interesting mash-up tapes. It's interesting to hear the same vocals placed over such a different backdrop only 15 minutes later; Inhumanz switches the jazz with screeching guitars, sampled vocals and a forward moving rock track that someone more in tune with that genre than me probably would recognize in a heartbeat.
"Days Off" is a truly fascinating journey into the career of one of hip-hop's most influential Groups and it's definitely a must hear if you're a fan! Tracks #1 to #4 is where the real heat lives, but there's no problem giving this a front to back spin. By the sound of it I would guess that the Three original songs on here are older tracks recorded around the time of "Stakes is High" but there's really no info so who knows. Although Discogs has it listed as a 12" EP there's no telling how official that release really is, but I can tell you that I would pay good cash had they made a serious press of this. For further listening I would like to take this time and recommend De La's retail "mixtape" "Impossible: Misson Vol. 1" which is a bit similair and is chock full of heat - I took the Liberty of adding my favorite joint "Relax" as a lil' bonus treat here. Download the full EP below as it's out of print) and TURN THAT FUCKER UP!!!! 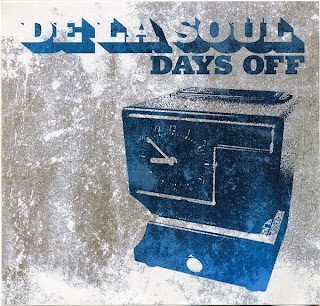