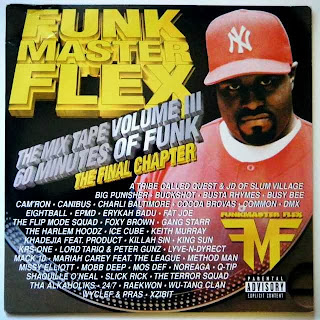 Between '96 and '99, Fukmaster Flex released a series of superb mixtape type albums called "60 Minutes of Funk" in three installments. All three volumes in the series are essential front-to-back listening, as it shows Flex' trul getting busy behind the boards, playing classics, freestyles, rare tracks and everything in between. If you're a hardcore collector like yours truly, all these definitely have a place in your physical collection as these mixes are filled with Funk's incredible skills as a DJ, showing he knows exactly what gets a crowd of hip-hop heads going - mixing classics, with rare records, and most importantly several selections recorded especially for these projects; sometimes self-produced by Funk himself. 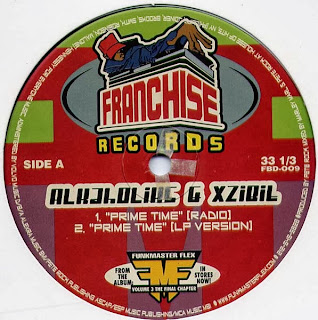 One of the most interesting of these excclusives that falls in the latter category is a joint called "Prime Time", featuring Tha Alkaholiks family including Xzibit, and Phil Da Agony, over a classic Pete Rock type production, mixed by super engineer Marley Marl. With names like these it would be a miracle if it wasn't a brilliant record in every way, which it indeed is. But what's really interesting about it is that it exists in two radically different mixes that both NEED to be heard by every serious fan of any of the involved artists. For the actual "60 Minutes of Funk, Vol. 3" listeners only got a quick chance to whet their appetite before the 1:22 snippet seauged into the next song on the !tape". While even a small taste of such a future classic is hardly a shame; when I found out that there is actually a full version of this song, stretching out over four minutes I just had to track it down... and so I did it!

The full version of "Prime Time" appeared on a very limited and rare Funk Flex Mixtape III 12" sampler on LOUD in 1998. Highlighting some of the most outstanding tracks from the mixtape in their full galore. The same happened to Tribe Called Quest's / Jay Dee's "That Shit" which had cut out Phife Dawg's closing verse on the Vol. II mixtape., and so on. But if a full version of that '98 banger from Tha Liks wasn't enough, what makes it even more interesting is that it's produced and/or mixed differently. All the basics of the beat are there, but Pete and Marley adds a lot of sonic treats not found on the mixtape version; So which is your favorite?