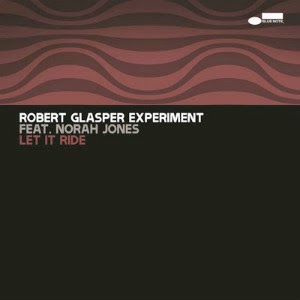 Yeah I know this is more or less strictly a hip-hop blog, but it's also my blog and as I'm a big fan of jazz, soul, some rock, and even some classical beside true school hip-hop you can count on any new material from Rober Glasper and his Experiment band getting pushed on The Lost Tapes. "Black Radio" from early 2012 was a very dope album that had its roots in jazz, soul and hip-hop, and the remix album "Black Radio: Recovered" were even iller. If you've paid attention you know that The Robert Glasper Experiment is soon to release the sequel to the aforementioned album, and with four singles released so far this is shaping up to be just as good, if not better, than the original installment.
Signed to Blue Note Records, the "Black Radio" series is moving away from Glasper's three debuting albums as he had ditched the majority of the accoustic instruments and replaced the piano trio with a bigger band that all embraces electronic instruments. Following "Calls" (w. Jill Scott), "Somebody Else" (w. Emelie Sande) and "I Stand Alone" (w. Common), the fourth and fifth singles sees Glasper and The Experiment team up with beautiful singer Norah Jones ("Let it Ride"), and Snoop Dogg, Lupe Fiasco & Luke James ("Perserve"), respectively. My favorite soul-jazz album of last year was without a doubt the "Black Radio: Recovered" mini album, and "Black Radio 2" might very well hold down that same position in 2013. The album drops October 29!