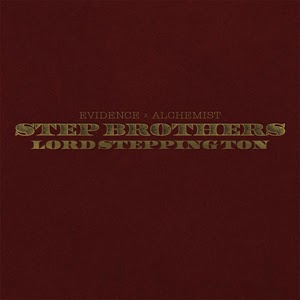 The sheer body of work Alchemist has produced over the last two-three years, and most of that consisting of front-to-back projects, puts him as the most productive producer our culture has alongside Madlib. Both also would make a top 10 list of my favorites, though the difference with their work ethic if you ask me is that Alchemist pretty much exclusively delivers material that's super dope, whereas some of Madlib's work (I'm thinking for example of certain sections of the "Medicine Show" series, though that had a lot of heat as well) I get the feeling that he at times just release record upon record without giving the material the refinement and self-critical thought the fans deserves. Enough about that but I'm just listening to Alchemist & Boldy James recent LP "My 1st Chemistry" set and stumbled across some refreshing news about an album that's been in the making almost since the start of both invovled artists careers.
I am talking about Alchemist and Evidence's "Lord Steppington" album as The Stepbrothers. This is something I've been looking forward to with a passion; considering I'm a huge fan of Dilated Peoples early 12"s and first two album where Alchemist always were heavily involved; in fact contributing some of his earliest released productions. Since then I couldn't imagine a release by Dilated, Evidence or The Chemist that wouldn't feature at least a couple of tracks featuring these two hip-hop gentlemen getting busy. This album however will see both of them rhyming together, though most likely exclusively over ALC beats, with guests such as Roc Marciano, Oh No, Fashawn, Action Bronson, Rakaa, Blu, Styles P, Domo Genesis and even The Whooliganz (!!!!). How dope does all this sound huh? And YES, the full-length will be made available on a double vinyl set so prepare yourself to get burned by some serious HEAT. Stay tuned for more info, and peep the teaser single that was uploaded a couple of weeks ago here - "Nothing To See / Hear"!
01. "More Wins"
02. "Dr. Kimble"
03. "Byron G" (Ft. Domo Genesis & The Whooliganz)
04. "Legendary Mesh"
05. "No Hesitation" (Ft. Styles P)
06. "Swimteam Rastas"
07. "Mums In The Garage" (Ft. Action Bronson)
08. "See The Rich Man Play" (Ft. Roc Marciano)
09. "Banging Sound" (Ft. Fashawn)
10. "Step Masters"
11. "Tomorrow" (Ft. Rakaa & Blu)
12. "Draw Something" (Ft. Gangrene)
13. "Buzzing Away"
14. "Just Step"
Posted by lost.tapes.claaa7@gmail.com at 3:07 AM