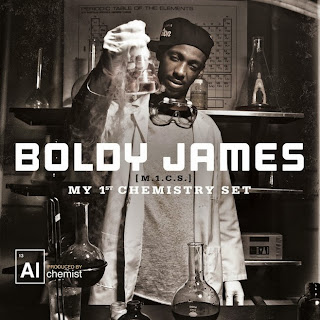 I don't know how the hell I could've missed that Detroit emcee Boldy James have teamed up with producer The Alchemist for a full-length project! The two first collaborated on "The Kosmos Pt. 2: Power Glove", one of the many standouts from last years "Russian Roulette". Consisting of 13 tracks, the Decon release boost features from Freeway, Action Bronson, Earl Sweatshirt, Domo Genesis and King Chip. "M.1.C.S. (My 1st Chemistry Set)" hit stores October 15; at least on CD (pre-order), I can't find any info on vinyl as of yet. Check out the posse track with Earl, Domo and Da$h, "Reform School", as well as the previously released single "Moochie". This shit goes HARD, defo checking for this drop!