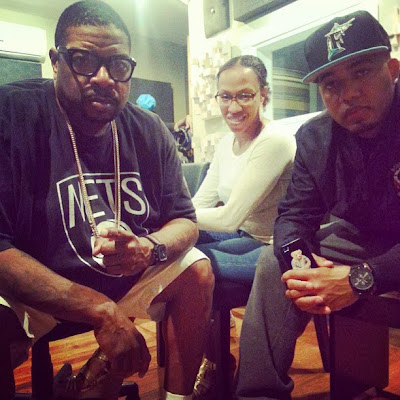 With the exception of some very few artists I really don't fuck with snippets, but this one is too crazy not to post. When I interviewed Diamond back in April, he had just gotten back from a session with Chino XL which he mentioned as one of his most exciting collaborations for "The Diam Piece LP". A few days back the self-proclaimed best producer on the mic posted a one minute long snippet of the track he was speaking about, "The Pain" is a collaboration between Chino XL and AG. This looks pretty damn mindblowing track on paper, but the actual song sounds even hotter than one could hope for. With a somber acoustic piano floating throughout the song, a hypnotically repetitive female vocal sample, and vintage Diamond drums the stage is set for Chino XL who comes armed with a flow not of this world and plenty of jaw-dropping lines, Xtra Large. Say what you want about Chino's own output past his debut, but he remains one of the most lyrical cats on the planet. Unfortunately the preview cuts off before we get a chance to hear AG's verse... Oh well!

In further news on Diam's upcoming producer album, yet another tracklist has been revealed via official sources. In my interview he made it clear that nothing definite about the tracklist, sequence or even which songs would make the final cut were yet decided, and that the first leaked tracklist was more of a blueprint. The new updated, latest, I believe is a lot closer to what eventually will be released; however I'm sure there still will be a bunch of changes/additions/subtractions before the tracklist is finalized. Especially considering the strange fact that "The Pain" isn't even on it (but neither is this or this, or Skyzoo who he's pictured with avoce)? Some crazy, marvellous shit that's got my mouth watering on here though - Fat Joe reuniting with Diamond is always exciting to me, especially when the track also features Chi-Ali and Mr. Bumpy Fucking Knuckles. Also it's fantastic that we will finally get a OC solo produced by Diamond D! Did you know that has never happened despite them being in the same crew for more than 20 years?

* source
Posted by lost.tapes.claaa7@gmail.com at 6:02 AM