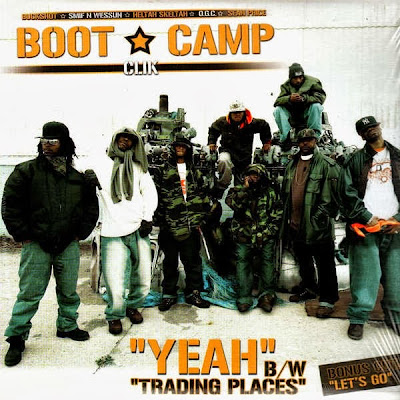 As we know this month marks 20 years since Black Moon unleashed their uncompromised, dirty and agressive debut album "Enta Da Stage" to an unsuspected market. The flag bearers for East Coast hip-hop at the time, while all fantastic in their own rights, were either the positively minded Native Tongues movement with cats like De La Soul, A Tribe Called Quest, Black Sheep, and Queen Latifah in the forefront, or the revolutionaries like Brand Nubian, X-Clan or Public Enemy. Black Moon and their Boot Camp Clik crew, together with Wu-Tang Clan who debuted at the same time, didn't fit either camp neither lyrically nor sonically; showing agressive youths formed by their poor surroundings hungry to make it into the big game through rugged but honest rhymes about their lifes. Black Moon consisted of main emcee Buckshot (sometimes backed up by the 5 Ft. Assassin) whose violence infused lyrics and unmistakable voice was as exciting as Da Beatminerz's, the producers of The Boot Camp Clik and "Enta Da Stage", lo-fi sounding juxtapositions of booming basslines, pounding drum programming, and the way they chopped jazz and samples into complete unrecognizability. The album sounds as fresh today as it did the first time you heard it and stands as one of the definite hip-hop classics, and still it was only the very beginning of a movement that would continue throughout the entire decade and beyond.

A few posts down I posted a short documentary of the group's early history and the impact their breakout had. As this is The Lost Tapes and I have put myself in the position where I advertise this site as having "the best compilations on the net", you know I ain't gonna stop at that. "Enta Da Stage" is one of my favorite albums, but so is the entirety of that first round of solo albums from the Boot Camp Clik (Black Moon's Buckshot, Smif-N-Wessun, Heltah Skeltah, and Originoo Gun Clappaz). "Enta Da Stage" was released in late 1993, followed by S-N-W's "Da Shining" in '95, and Heltah Skeltah's "Nocturnal" and "Da Storm" in '96. The main producers of these four LP:s were Da Beatminerz, mainly consisting of brothers DJ Evil Dee and Mr. Walt but around the mid-'90s also added Baby Paul and Rich Blak to the ranks, and although every single emcee behind this album are truly exceptional talents, it was the sound of Da 'Minerz that gave them a coherrent sound as a series of LP:s. The team produced the entirety of "Enta..." and "Shinin'", while they settled for half of the music on both the latter two albums.
The idea for this compilation, aside for doing something for the 20:th anniversary, came a couple of weeks back when me and my man were watching some classic videos, and we put on some of the tracks from "Dah Shinin'". Linkan made me aware of the videos for "Wrekonize" and "Sound Bwoy Burreil" making use of the 12" remixes rather than the actual LP versions; the same goes for Black Moon's "I Gotcha Opin" and Heltah Skeltah's "Therapy". Following this I started looking through all the 12" and single releases from those four albums and came across a whole lot of remixes and B-sides that in itself would make for a terrific Boot Camp Clik album; one a lot closer to what the original BCC fans had hoped "For My People" would have sounded like, and probably would have been the case had they not ditched Da Beatminerz; which to me Always was a very strange move. For me, that's like if Wu-Tang Clan would have decided to release "Wu-Tang Forever" without any RZA involvement whatsoever, as far as the beats go that is. But I'm getting off the topic here...

One small obstacle in doing this compilation was that some of the Black Moon material had already been collected on a semi-unofficial Nervous Records album called "Diggin' in Dah Vaults" back in '96. However, I am not using any of the songs found on there that had not previously appeared on any 12" or EP; I also ditched "Son Get Wreck" remix since it's a 5 Ft. solo and he was never an official part of the BCC. The single "Headz Ain't Redee" was my definite choice for album/comp opener, but instead of using the same version heard on the aforementioned compilation (which was produced by Buckshot), I am using the Beatminerz version from the 12" single. I also ditched "Fuck 'Em", the B-side to "Who Got The Props"; mainly due to time restraints but also to cut down on songs found on "Dah Vaults". Other than that it's pretty much all here - you got all the aforementioned video versions and other 12" remixes in HQ rips, you got B-sides like The Fab 5's "Blah", their sequel to "Leflaur Leflah Eshkoshka", Black Moon's "Murder MC's (The B-Side)" and "Reality (Killing Everything...)". Probably most excitedingly to some are the inclusions of two songs recorded and until last minutes intended for "Dah Shining" and "Da Storm" - "All About The Cash" and "Likkle Youth Man Dem" featuring Smif-N-Wessun, respectively. The latter is not the cheap remix on "For My People" but the actual Baby Paul produced original that most versions of "Da Storm" still list as track #16 on the back cover, despite there only being 15 actual tracks.


I don't really think I need to sell this any further - if you're into Boot Camp Clik or Da Beatminerz, and especially the early works of both then this compilation is definitely a Heavy hitter. Speaking for myself, it's what's been banging in my headphones the last couple of Days which has allowed the sequence and final tracklist shape up to perfection. In other words a lot of time, thought and headnodding has been invested into this one to assure my readers the strongest and most coherrent listen possible. So spark one up, step into your Timberlands, throw on a nice hoodie, spark one up and let the volume BANG! 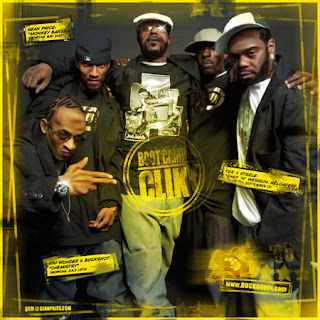