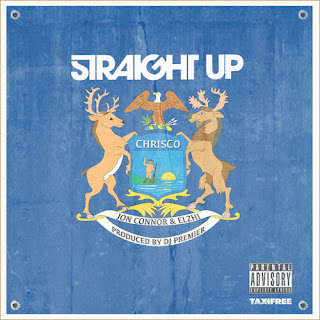 Wow, superb joint that boosts a crazy line-up and smooth but banging production and cuts by DJ Premier. ChrisCo has dropped a lot of interesting stuff the last year, so I'm stoked to see what he'll cook up the time comes for him to drop the debut LP. "Straight Up" will officially be released as a digital single tomorrow, but thanks to Gim and the DJPremierBlog we already now got a rip of the premier from Saturday's LiveFromHQ show.

EDIT - The single has now been released without tags and in full CD quality version. The ID3 tag says it's from a project titled "MI State Of Mind" so stay tuned for more info on that release. Link to the new file added below.

CHRISCO x ELZHI x JON CONNOR - "STRAIGHT UP"
Posted by lost.tapes.claaa7@gmail.com at 1:30 AM