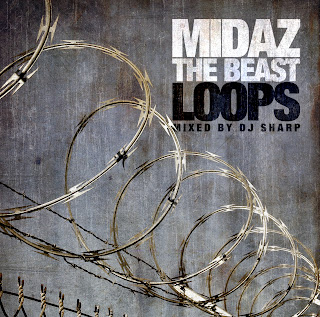 As is custom with Orlando emcee MidaZ The Beast, his latest project is a concept album; and it all revolves around "LOOPS" (as in a short sampled passage that is then repeated), which is beautifully illustrated by the cover. While the music then becomes a lot more basic than the overblown Kanye West type of productions we hear on the radio, which has both its pros and cons, it does give MidaZ the freedom to take center stage and deliver his best lyrical performance yet.

One thing with MidaZ music is that as good as all his material has been born out of a concept of some sort or the other. "LOOPS" is no exception to this rule, although it is a fresh concept for both MidaZ and for today's hip-hop mixtape scene. As the title suggests, the music is stripped down to its most basic form by hooking up a specific part of a record into a continious loop, for the rhymes to be delivered over. On "LOOPS" it is in the realm of soul classics that we are dwelling. What I like about this idea, is that it basically takes us back to the origins of hip hop music; a fly break is maintained while an emcee must show and prove. DJ Sharp, who is the co-conspirator of the tape, begins the project with a sample of Chi-Ali's voice: "I took a funky beat and I looped it". This is repeated a number of times, building up anticipation before a haunting vocal sample, a nice jazz guitar and a funky bassline builds up a cool intro. Soon the real track kicks in, "Take Me With You". Over a familiar, dirty bass guitar and a soothing vocal sample, MidaZ enters the booth for the first time; making his presense known with a declaration of sincere love to his other half. This is honoring the theme from the original soul joint the song is based on, and the way MidaZ voice, cadence and rhyme scheme marries with the beat is all excellent. Still, I think it would have been wiser to open up with something a little harder, that would really make our jaws drop. Frequent collaborator IMAKEMADBEATZ loops up what sounds like a high pitched soul-jazz cut, with a real addictive guitar sample which influences Midaz to write a rhyme on "Time Wins" and how you can never beat it. This is an early favorite of mine; barely lasting 90 seconds, the repeat button is best to keep close at hand for this one. "Is it possibly something that you can really trade? Like, write me a check for $50, I give you them 30 days/ No, it's more like, nigga play your cards right, be alright/ Unless you're in a hospital bed, regrets all night/ Hold every moment as true, and use your honor too/ 'Cuz though time is man made, it's behind you AND follows you / Time Wins!" - Midaz cleverly spits with a delivery as sharp as his DJ. For me, this would have been the optimal introduction to the record.

MidaZ jumps between themes and concepts, but always has something to say. Two of the strongest cuts comes in the form of the similiar, yet very different, autobiographical "In My Life" and "Flash Forward", respectively. The latter has a more uptempo beat, and beautiful vocal chops, which inspiries our rhymer to take a nostalgic trip through growing up, picking out a few happy memories of every summer that gives us insight into both where he's been and where he's heading. "In My Life" on the other hand is more somber with it's 70's oozing bass and guitar groove as MidaZ instead remembers the more troubled parts of his life; growing up with a drug-addicted father, confidence issues, fallen friends and other vivid but painful memories. It's often said that heartbreak and pain makes for the greatest art, a statement that is often true; so also here, as "In My Life" is one of the absolute strongest moments of the album. An emotional ride full of quotables - "In my life, I had friends I could've saved from their faith/ Do it again, and I'd had taken their place/ But I learned life shies from making mistakes, that's why I might cry but take it as, Hey; what can you do right? I used to open my pad, and write by the moonlight/ Now I keep them feelings inside, wrapped in coocoons, tight". It seems the coocoons are opening up again.

On "Cheatin' On You" we instead get a large dose of black humor, as the artist deals with the the battle that is to maintain a functional relationship whie giving the time needed to a true personal passion - in this case, of course it's music that is "the other one", but it's something that could be translated into a number of things. MidaZ has some hilarious lines on here too, just the way he ends it is top notch: "I watched my woman pack her bags, and do her hair/ I think she said she's getting out of here, but I couldn't hear with the music playing... Damn!" As on most of the project the beat does what it's supposed to and is dope, but the concept and delivery is what really makes it a standout. 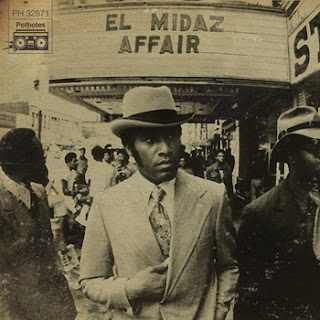 With the help of DJ Sharp, who inserts various vocal samples, scratches and breakdowns of the loops following Midaz's verses, the tape is a sonically strong experience. It's refreshing to hear strong records being created from the most basic of premises, and the use of nothing but 100% sampled music gives it a nostalgic value that will be appreciated amongst hip-hop listeners who grew up during the '80s or '90s. However, the production can sometimes become a little lacking, or empty, in parts of the album, so in a way the nature of the musical direction is a double edged sword. On the whole it is definitely much more on the positive side. Most of the songs are also relative short which helps to keep it musically tight, and avoid it from becoming too repetitive. Being a soul fan will definitely enhance the experience as well, as almost all tracks are either sampled straight from soul records, or sampled in a way that make them sound like they are. But that is fine, as MidaZ is bringing a whole lot of soul food to the table himself. As described above, he's just as open to invite his listeners into the darkness of growing up in a broken home, as he is to humorously describing choosing music over a girl, or creating concept tracks like "Time Wins", "Me & My Bitch 2011" or the important truth that the "President(s)" never told you. "The Rain" is another stand out, which is the cousin of Ghostface's classic "The Sun", and anyone that always wanted to hear some god damn rhymes over that insane interlude with dead prez from Pun's debut are in for a treat!
At the end of the day, I could go through this project track by track, and quote by quote, but as you'll all hopefuly grab this for yourself tomorrow, you will get to experience these beats and rhymes for yourself. Fans of MidaZ previous work are guaranteed to not be dissapointed, and if he doesn't gain a gang of new ones from this one, I'd be suprised to say the least. The music bangs but are never intricate enough to steal anythinng away from Midaz who's voice, mic presence and intricate rhyme schemes coupled with the well written lyrics and varied song themes makes this, in my honest opinion, MidaZ The Beast's lyrically finest hour yet. And I am sure we have just yet seen the beginning...
Posted by lost.tapes.claaa7@gmail.com at 9:22 AM