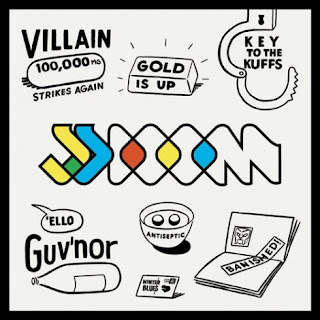 MF DOOM is easily one of the most creative producers AND emcees in the game, with classic releases like "MM... Foood", "Operation Doomsday", "Vauderville Villain", amazing outside productions and so much more. Most recently we heard the one and only MF DOOM producing the entirety of the always incedible Masta Ace; resulting in "MA DOOM: Son Of Yvette". A dope album by all means, but still slightly dissapointed considering how Ace decided to use all beats previouly released on the "Special Herbz" box set, and by extension other previous DOOM project. What most of us really are waiting for however is the almost mythical meeting with Ghostface Killah on their constantly postponed "Swift & Changeable"on Nature Sounds.


However, the Metal Face is still going strong and gearing up for new projecs, and just as befoe he seems as striving to not be pigeonholded within a genre. The first official project since 2009:s underrated "Born Like This" is a full-length collaboative LP with alternative rapper and producer Jneiro Janel (also known as Dr. Who Dat?). Using the logical moniker of JJ DOOM, the album is titled "Keys to the Kuffs" and is set fo an August 20 release on Lex Records. Cameos on the project comes from Khujo Goodie, Damon Alban and Beth Gibbson with all production coming from Janel and all vocals provided by The Illest Villain. So far two tracks from the album has been released, as well as two remixes of songs that will appear on the retail; the Radiohead version of "Retarded Fren"  and the Dave Sitek remix of "Rhymin' Slang" . If you missed anything, here they all are in steamable format. It's actually sounding very promising to me, and DOOM is rhyming his ass off as expected.