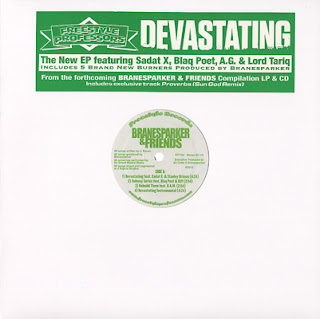 It's always a blessing when any of those acts that had a classic 12", LP or EP back in the early to mid '90s resurfaces and reedems the career tha early release should have warranted them. One of the best examples of this is Freestyle Professors, who has come back strong both as a music group and as a stellar underground label in the later 2000s. Their 2009 LP "Gryme Tyme" brought back the gritty D.I.T.C. sound better than any of the actual Diggin' members themeselves has managed to do in the last few years (it should be noted that all their producers put in work on said album though). Since then several quality EP:s, 12"s and limited vinyl been coming from Freestyle Records.

The latest gang of releases includes the very solid looking "Devastating" completely produced by Branesparker. Guesting on the 6 tracks are Blaq Poet, Stanley Grimes, AG, Sadat X, Giff, B.A.M.,  Lord Tariq and Akbar, so this should definitely be worth the $15 it costs you. If you got some extra cash you can also choose to pick up the EP in a limited double package with an exclusive 7" and an additional 12" EP of unearthed late '80s tracks by the Bronx artists Magnificent Shakeem, also produced by Branesparker.