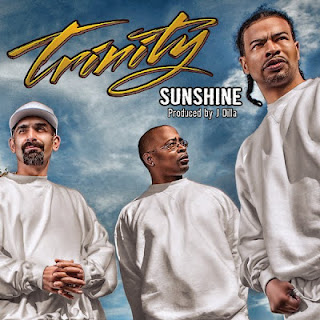 The Trinity Project, a group collaboration between AG, Sadat X and DJ Jab, has been said to be dropping soon since 2009. The line-up is of course one of undisputed greatness, and the latest single "Sunshine" gives all the reason to still take this trio very seriously. The cut uses a beat from the late genius J Dilla, and will be released on clear 7" vinyl, with the tribute to Grand Master Roc Raida on the flip. Check DJ Jab's own word on the project:

"I'm excited about this track as it features a J Dilla beat and he is the biggest producer on the record. The clear 7" also includes a tribute track to Grandmaster Roc Raida who is another Hip-Hop legend that I had the honor of working with at Fat Beats. For authentic Hip-Hop heads there is nothing else like it... Dilla on one side of the vinyl and Raida on the other by incorporating "Beats for Jugglers" for the tribute." - DJ Jab

A few months back, AG mentioned working on a forthcoming J Dilla project and commenting of the dopeness of said track via Twitter. It's my guess that the project was soon after decided to turn into a Detroit all-stars compilation, and that AG then purchased the beat for use on the Trinity project. I don't think I ever heard this Jay Dee beat before, and X and A sounds great on this. All props to Crates of JR for this one; thanks!

TRINITY - "SUNSHINE" (Ft. Janelle Collins)
Posted by lost.tapes.claaa7@gmail.com at 6:21 AM