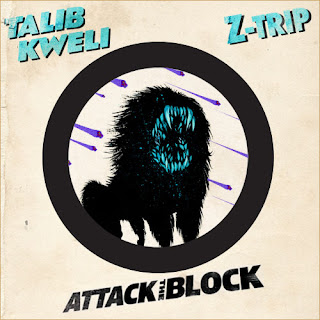 Talib Kweli's forhcoming sixth solo album "Prisoner Of Consiousness" will hopefully be available in stores before the end of the year. In meantime, Kweli has hooked up wih legendary DJ Z-Trip for an all-exclusive mixape titled "Attack Of The Block", which should hold heads over to the retail release. The free tape will hit the net on Monday, and is sounding damn promising judging by the two leaks and the press coverage so far. Thugged out Maino pops up on the 9th Wonder produced "The Music" which should definitely not be slept on. The other single features singer Jessica Care Moore; no production credits given here though. Bottomline  I'll defininitely looking forward to get the chance to hear this tape in full, and the same of course goes for "Prisoners Of Consciouss" One of the producers slated for the latter project is none other than The Man With The Iron Fists himself; The RZA.