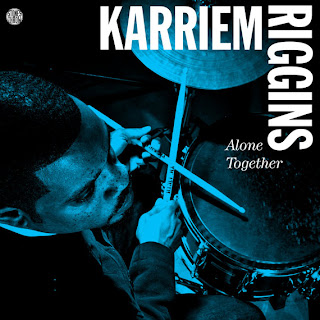 As a huge fan of both hip-hop and jazz, Karriem Riggins' has always been a musician and producer I held in the higest regards. ?uestlove is most often given the title of "best hip-hop drummer", but if that's the case then Riggins sure ain't far away. Besides providing impeccable drumming on hip-hop classics by Common, Jay Dee, Erykah Badu and Percee P, he has also performed and recorded with people like Oscar Peterson, Ray Brown, Milt Jackson, Herbie Hancock, and even Paul McCartney.

For Riggins' forthcoming official solo debut, "All Alone", the focus will be on his work as a hip-hop producer, and combines 34 exclusive instrumentals in a "The Beat Konducta"/"Donuts" fashion. The qualiy of his past work points towards good results coming out of this, after all Riggins' was he one Jay Dee trusted to complete his final release, "The Shining", which was about 75% completed when he departed from this world. If you want to hear a good mix of his production work, peep the "Karriem Riggins Produced This" podcast from Stones Throw.

PRE-ORDER KARRIEM RIGGINS' "ALL ALONE"
Posted by lost.tapes.claaa7@gmail.com at 1:41 AM