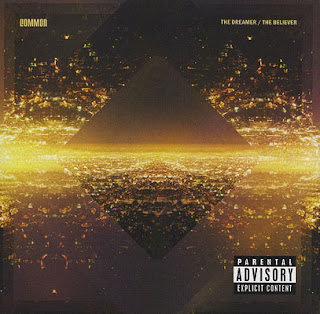 Common Sense, nowadays known as Common, keeps pumping out great music on the regular. Besides the very sub-par "Universal Summer", the Chicago emcee walks the fine line beween hardcore rapper, conscious emcee and commercial artist, and so far this has worked out great for him. His latest album, "The Dreamer / The Believer" sees the long awaited reunion between Com' and his original producer No I.D.; and while it's clear that both of these Chi-Town representants has changed a lot, the LP packs a whole lot of heat. There's more live instrumentation than what we migh be used to from these guys, but the overall vibe manages to take the listener back in time while also showing a glimpse of the futuristic sounds that are about to come. I'm still (!) waiting on my vinyl copy, but hopefuly that should find its way to my mailbax soon enough. Head over to.Cocaine'80s for more info about the duo's new group, where you can also grab lots of projects free of charge if you're still sleeping..
Often when an album is released, I delete all the pre-singles that anyway appeares on the LP, but in this case I held on to them. Yesterday Compelx Magazine droppped a full-length song called "No Sell Out" which sounds something like an MF DOOM producition, and actually works very well. I also found two demo versons of "The Dreamer" and "Ghetto Dreams", respectively, which both are a lot more agressive than the retail versions. All three songs were produced by No I.D, and I also added the "Six" cut by Cocaine '80s as a bonus.

COMMON - "THE BELIEVER EP"
Posted by lost.tapes.claaa7@gmail.com at 7:04 PM