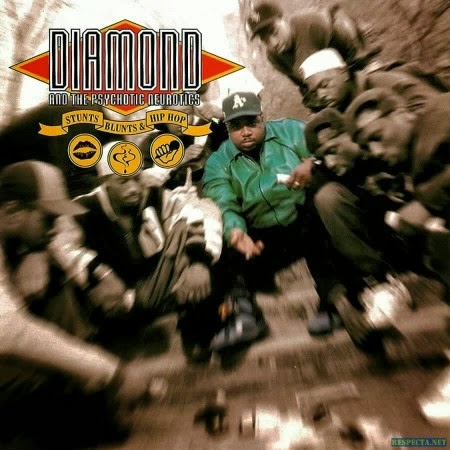 Unkut.com is without a doubt one of my favorite sites on the net as they always have great interviews, and ofen post very sick music. Recently Robbie Etterson got the chance to build with one of the greatest of all times, producer Diamond D, for a track-by-track breakdown of Diam's timeless '92 debut "Stunts, Blunts & Hip-Hop". These type of articles is among the favorite hip-hop articles I like to read, so much that I have copied it here below, which I of course hope is Ok with Robbie. You should still visit the original link which includes an intro and a link to an additional interview with Diamond D about future projects and much more. To go straight to that interview you can also click directly here. Huge props goes out to both Robbie and Diamond D for this brilliant trip down memory lane.

Diamond D: I’mma keep it a hunned with you, I only wanted twelve songs on there. But you’ve gotta remember in the early 90′s it wasn’t uncommon for an album to have 18, 19 songs. You look at Pete Rock‘s album, Mecca and the Soul Brother. You look at De La Soul‘s first album. If it had been up to me it wouldn’t have been 21 songs on that album. But Chemistry was just like, “We gonna just roll the dice and throw all the shit on there.” I can’t say which ones I would have left off, but I can tell you I ain’t want all 21 on there! But it seems like it’s good that they did that, because I never put out an album with them again.

“Intro”
Mos Def said, “Hey, I wanna rhyme over that intro beat. I love it!” I went in the studio and I did it over for them.

“Best Kept Secret”
When I recorded “Best Kept Secret” I wanted it to go on the Ultimate Forcealbum. Then when I saw that Strong City were in the process of losing their distribution deal, I had to make a decision. Do I just wait, or do I try to explore some other avenues? I went to Chemistry Records initially to play beats for an artist they were looking to sign – his name was Joe Control. While there, I mentioned that I also rhymed and then I played them my stuff. It’s the same version [as used on the album], without Fat Joe going, “Come on! Come On!” [laughs]

“Sally Got a One Track Mind”
I made that beat using the Alesis HR-16 and the Akai S-950 in about twenty minutes. I didn’t know what I was going to do with it, then I went in the studio and I wrote “Sally.” I made it for my younger sister, who was a child at the time, so she would grow up and understand you don’t look for love in the wrong places.

“Step to Me”
Showbiz made that beat, soon as I heard it I fell in love with it. I added the horns in the chorus and I added the “Ready or not.” Everything else was Showbiz. “Holy mackerel!” was just me trippin’, having fun. I got that from being around my older uncle. He used to watch old Amos and Andy tapes, and there was a character on there called Kingfish. Every time some shit jumped off he would say, “Holy mackerel.” The shit was just funny as hell to me back then.

“Shut the Fuck Up” [skit]
I just had the mic on in the studio, recording everybody. I don’t even think they knew I was recording, because every session was like a party. I want to make a note also – Fatman Scoop was on all of those skits, snapping on people and telling jokes. He’s one of the people on my album, before he became Fatman Scoop. I know you didn’t realize cos I didn’t tell a lot of people! [laughs]

“Fuck What U Heard”
Lakim Shabazz gave me the record and I put the drums to it and I put the horns on it. The record he gave me was the bassline, and I built everything up on that. I always loved Sadat X‘s voice, so I sampled him. I always went in the studio with a basic idea of what I was going to do – at least musically.

“I’m Outta Here”
Growing up around my block, there was a movie theater called The Prospect, and much more worse shit jumped off in that movie theater than I rhymed about. Even though I was telling a story, you would see shit like that all the time in the South Bronx in the early to mid 80′s. That’s just a fact! We’re talking about the Reganomic years. Ronald Regan‘s solution for low-income people was to give ‘em some blocks of cheese and some fuckin’ butter! They had the wolves out there starving, so I was just rhyming about shit I was seeing. In the early 80′s it was not uncommon for people to talk during the movie – I mean really sit there and talk to the movie screen like it’s a person! Sometimes it would be annoying and dudes would say something, “Shut the fuck up! I wanna watch the movie!” For the remix I added some extra drums – you can tell by the pattern, it’s a bit different.

“A Day in the Life”
That was recorded before “Punks Jump Up…” I got that record from my uncle Kevin’s record collection. I invited Sadat X and Jamar and Puba I believe, I think just Jamar and X showed up. We just vibed and we knocked it out. Shane Faber played accompanying keyboard on that track later in the process.

“Red Light, Green Light”
Just talking about relationships with different women, the pro’s and the con’s. That song is special to me because I went to the kindergarten center in my projects and I recorded the kids singing that, the class of ‘92 that was leaving kindergarten. I just like how it came together.

“I Went for Mine”
That was Jazzy Jay, my mentor. Jazzy Jay saved my life, on everything I love. When I met Jay I was already a DJ, but I was outside on the streets, fucking up, doing stupid shit. When I got around him it made me want to straighten up. Jazzy Jay put that together. I think I added the drums and Jay added the basic loops. A lot of people were unfamiliar with where that sample came from, so when they heard it [the flute part], they were like, “Oh shit!”

“Check One, Two”
45 King, good friend of mine, he gave me the record. I met The 45 King in 1989 at an Ultimate Force show, we were on the same bill as Queen Latifah. He was doing a DJ set and he played an old breakbeat by Melvin Sparks that only a b-boy would even know, so when I heard that shit I’m saying to myself, “Yo! Who the fuck is in here playing this shit?” This is an original Bronx park break! So I make my way over there and I’m like, “Yo! I feel you.” That’s how we met, at Hunter College in Manhattan. It was Slick Rick, Queen Latifah and the Ultimate Force.

“What You Seek”
Large Professor was hanging out in the studio with me when I recorded that song, not a lot of people know that. I met Large Professor through Lord Finesse, probably a year earlier, and we just developed our own relationship. I respected his work, he respected my work.

“Confused”
After Mercury’s investment in my album, they wanted a record that they could try to work on radio, which they didn’t end up doing any damn way!

“Pass Dat Shit”
That was my little posse cut, that was the first time anyone, anywhere heardFat Joe on wax. Also one of the Psychotic Neurotics was rhyming on there, my man Whiz One. Maestro was from the North Bronx, up by Murdoch Ave/Hill Ave area, and Mike G.Q. were from the west side of the Bronx. These were all people that I just hung out with around that time.

“Freestyle (Yo, That’s That Shit)”
[Large Professor] gave me the record, I said, “Yo, lemme hold it, I’ll give it back to you” and I gave it back to him. It’s one of my favorite songs on the album. I always went in the studio with a basic idea of what I was going to do – at least musically.

“K.I.S.S. (Keep It Simple, Stupid)”
Q-Tip gave me the bassline and I just added everything else. What’s interesting about that track is that, by coincidence, Premier used it for “DWYCK.” But if you listen closely, it’s the same bassline but in a different time sequence.

“Wuffman Stressed Out” [skit]
One of the dudes was looking real wolfy that day. Beard all crazy, no line or nothin’! Straight Grizzly Adams!

“Feel the Vibe”
It was more a cautionary tale. Back then, as crazy as it sounds, it was taboo to want to make a pop record! [laughs] We were waving the underground flag heavy. That’s one of my favorite records on the album.
Posted by lost.tapes.claaa7@gmail.com at 6:52 AM