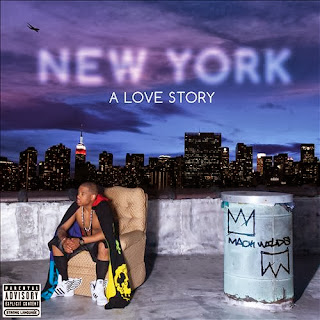 A couple of nights I ago I posted the Method Man assisted "Land of the Wild Things" from The Wire actor Tristan "Mack" Wilds turned R&B singer. As the first signee to Salaam Remi's production company Re Mi Fa / Louder Than Life, Wilds and the Award winning producer have been hard at work on the singer's debut album "New York: A Love Story". Not to be confused with the super sugar coated R&B of today, this is often more reminiscent of the street-edged crooners of the '90s that often used hip-hop beats and didn't exclusively sing about love.In that vein, Salaam and Mack have rounded up additional beats from hip-hop legends like DJ Premier, Pete Rock, Havoc, Bink!, and James Poyser which was then given additional touches and production by Remi, meaning that he in some shape or form have had a hand in producing every single song on the LP.

Unfortunately there's no production credits around for most of this yet, though I know that "Land of the Wild Things" was solely produced by Salaam Remi, while "My Crib" and "Henny" was produced by Bink! and Havoc, respectively, (both with co-production from Remi). An educated guest is that Premier co-produced and put the scratches on "Keepin' It Real", while Pete Rock might have done the same for the strictly hip-hop oriented "Duck Sauce". Guest features are kept to a minimum but the ones who appear are all terrific writers and long-time greats -  Meth, Raekwon and Doug E. Fresh... TheUrban Daily has been given the get-go to premier the LP in its entirety, before it officially drops September 30. Be sure to give this one a spin unless you absolutely hate R&B (and even then check out "Duck Sauce", "Keepin' It Real" and the feature cuts).