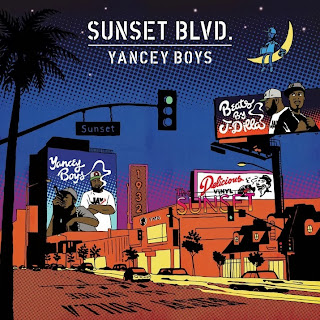 As I'm sure you haven't missed out on, The Yancey Boys are back in town and preparing their second album release on Delicious Vinyl for this year. The first album that was released a few years back featured Dilla's little bro Illa J rhyming over unreleased Jay Dee beats from the '95-'97 era, and to be honest I was never a huge fan of that project. However, the second album, which is called "Sunset Blvd.", is a little different as it's not a solo project by Illa J but rather a collaborative effort between Frank Nitty and Illa; again rocking over previously unheard beats from the Dilla vaults. Judging by the three singles that have been released so far this album, production, lyrics, guests, mixing sounds like a worthy addition to Jay Dee's posthumous catalouge. And the large amount of talented guests that the tracklist below reveals is not exactly hurting things either... If you have missed any of the singles, just click on the titles containing links below, and get ready for the October 29 release on Delicious Vinyl (and I'm glad to announce that the album will be available on both wax and compact disc; with the latter also include a bonus disc of all the instrumentals). Pre-order it in your format of choice @ UGHH!
01. "Dilltro" (Ft. Dank)
02. "Fisherman" (Ft. Vice, J. Rocc & Detroit Serious)
03. "Lovin’ U" (Ft. Eric Roberson)
04. "Go And Ask The DJ" (Ft. Guilty Simpson & J. Rocc)
05. "Jeep Volume" (Ft. T3 & C-Minus)
06. "Flowers" (Ft. Talib Kweli, Niko Gray & Rhettmatic)
07. "Honk Ya Horn" (Ft. J. Pinder)
08. "Slippin’" (Ft. Early Mac)
09. "Without Wings"
10. "Beautiful" (Ft. Posdnuos & Botni Applebum)
11. "Quicksand" (Ft. Common & Dezi Page)
12. "Rock My World" (Ft. SlimKid3 & Niko Gray)
13. "The Throwaway"
14. "This Evening"
Posted by lost.tapes.claaa7@gmail.com at 6:19 AM