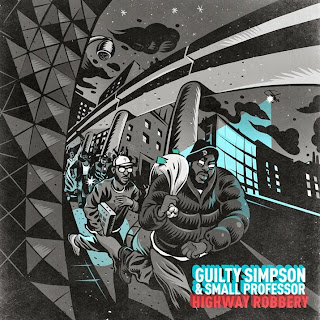 I'm always hyped as fuck for any new Guilty Simpson, and with the three songs that have gotten the single treament from the ruff "D" lyrical monster's collaboration with talented producer Small Professor (who's sound compiment Guilty's hardcore style perfectly), my anticipation has grown with each song I've heard. The 10-tracks deep album, which is called "Highway Robbery", hit stores and digital retailers this morning and the artists and Soulspazm label have together decided to put up the entire project for free streaming, so if you haven't bought or ordered the album yet I strongly recommed you to hit play ASAP and turn this grimey motherfucker the way UP. We already heard cuts with AG, Statik Selektah and Boldy James, while other guests on the short but effective LP includes DJ Revolution, Castle and Elucid, though there's no question that it's Guilty and Small that are the real shining stars here... While the cameos are often great, I sure wouldn't mind having this be a solo project in the truest sense of the word. But don't take my word for it, press play and take this gritty trip through boom bap beats, hardcore lyrics and overall excellent hip-hop music.

EDIT - Having now listened through the project twice, the only real dissapointmen comes from the fact that "Highway Robbery", which was advertised as a new album is actually nothing more than an EP release, albeit a very sick one! Its 10 tracks clocks in at barely 25 minutes tracks including three interludes. Add to that that the two closing songs are alternative versions of joints already released; one of them even appearing early on the EP. But as long as the music is banging like this, I can't really complain too much. And of course both Guilty and Small is in good shape here, providing straight up heat! If the embeded player don't show up below, click here!

Posted by lost.tapes.claaa7@gmail.com at 6:10 AM