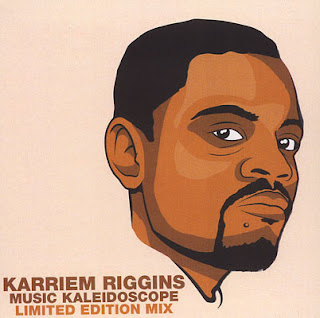 Producer, DJ, and live drummer Karriem Riggins was a close friend of J Dilla, played extensively with Eric Reed and Oscar Brown, and produces instrumental hip-hop for Stones Throw. Easily one of Detroit's finest modern musician and just as easily someone that more heads should be very aware of. I'm not going to write too much about him right now as I intend to drop a 20+ tracks compilation of his outside production work here on The Lost Tapes already tomorrow. So, see this is a little warm up for you all to get acquainted with the musical wonderchild that is Karriem Riggins...

"Music Kaleidoscope" was a limited promotional CD released in 2009 on an imprint called Jae.B Group. During its 50 minutes run we are acquainted with Riggins the DJ, Riggins the producer, Riggins the drummer and Riggins the jazz lover in a seamless mix. Press play on the Soundcloud player below (thanks to Furious.Styles for the original upload) and enter Karriem's grooving mix of classic jazz, fusion, funk, R&B, and new compositions. A definite sure shot while you're waiting for the "official" compilation to be brought forward tomorrow... Keep that head moving!