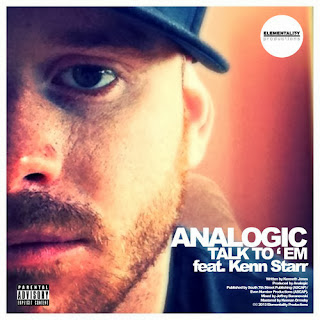 Beautifully chopped and filtered track by Analogic where both he and guest Ken Starr go all in. "Talk To 'Em" is the second single from Analogic's upcoming LP "The Booth Shall Set You Free" which is scheduled for a winter release. Analogic is a talented producer and emcee alike, having produced bangers for MadKem, Silent Knight, and many more, so its clear this album should be something out of the ordinary. Beside Kenn Starr, guests are set to include several members of the EMPB team such as Silent Knight, East, MadKem, Jered Sanders, and Justin Bates, as well as a host of non-related spitters that are undoubtedly nice with it - or how about Wordsworth, Supastition and Hasaan Mackey.

Posted by lost.tapes.claaa7@gmail.com at 2:42 PM