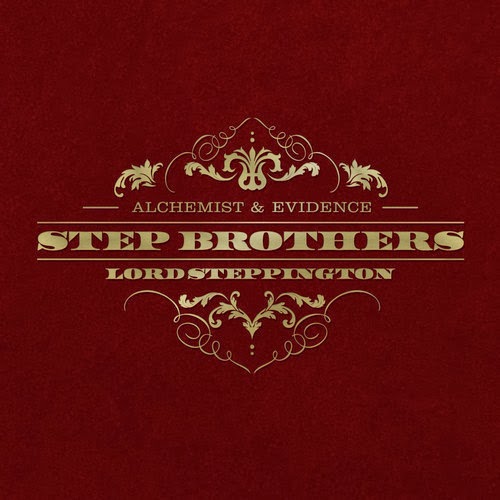 Oh shit! One of my most anticipated albums in some time is finally hear... Alchemist has definitely been amongst the most interesting and consistent producers of the last two years, and when he first debuted on the scene it was together with Evidence and the Dilated Peoples crew (yeah, even before he became DJ Muggs protogé). Starting with producing 2/3 of Dilated's first 12" single in '97, Al went on to produce a total of about 16 tracks for the crew over their next four albums; a long with several B-sides and singles. Add to that that he was one of the main producers of both of Evidence's two solo albums and plenty of guest apperances featuring them both, and it was obviously only a matter of time before ALC and Ev went full circle by creating the duo Step Brothers. The album "Lord Steppington" has been in the works for a couple of years but is now finally here. Besides leaking a few trailers and snippets we also got our share of dope non-album cuts ("Ron Carter"; "Step Masters"; "Nothing to See Hear").

The full "Lord Steppington" album is finally being released today on Rhymesayers Entertainment, and packs features from The Whooliganz (!), Rakaa, Styles P, Roc Marciano, Fashawn, Action Bronson, Blu, Oh No and Domo Genesis. While both rappers rhyme on the record, the entire album is produced by Alan The Chemist save for "Byron G" which was laced by Evidence. I'm listening to the album now, and it's straight fucking FIRE.. Will definitely have to buy this at one point, hopefully sooner rather than later, but I just ordered a package of wax and my economy is pretty much down the drain at the MO.

The good people at Rhymesayers and the artists involved have decided to put up a free stream of the entire 14 track project (the iTunes deluxe edition features two additional bonus tracks though) via Soundcloud. Order the album @ UGHH (CD or 2xLP), iTunes (digital), or get an autographed copy with a bundle also including a T-Shirt and stickers @ FifthElementOnline. Until then, check out the free stream of the full thing below, and whatever you do... TURN IT UP!!

Posted by lost.tapes.claaa7@gmail.com at 7:17 PM