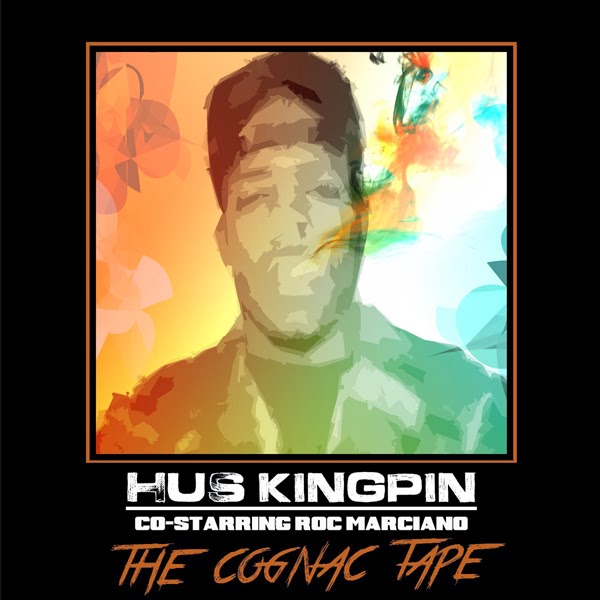 I debated a bit with myself if it would be right to include Hus Kingpin's "The Cognac Tape" amongst the best albums of 2013, and that for a couple of reasons. Not due to it's esthetical values, because it is without a question amongst the absolute flyest collections of music released all year, but it is in fact a slightly touched up version of a 2012 drop, and a mixtape at that, that at first was made exclusively available as a digital download. In September of last year, Mello Music Group then realized the incredible power of Hus' material and gave "The Cognac Tape" a much welcome physical release on cognac colored vinyl. They also added a couple of bonus tracks and threw Roc Marciano's name on as a co-star to boost up sales. However, I didn't hear the album, mixtape, mini-album, or whatever you want to call it until MMG stepped in last year, and the fact that it was actually released in physical format for the first time in 2013, I think it qualifies for this countdown. Especially as I absolutely love this project! So with that out of the way, let's get down to the actual music and what it is that makes it such a great one...

Hus Kingpin, previously only known as Hus, is one half of the duo Tha Connection together with fellow emcee Smoovth. They are signed to the Digi Crates imprint and in 2012 they released the excellent "Strive" featuring several apperances by Roc Marciano, Rozewood, Ghosta Nostra and producers Mok Vurban, Foka, DJ Kryptone and Ialone. All of these makes apperances on "The Cogmac Tape" and two songs actually cross-appear between the two releases virtually unchanged; "Game of Life" and "Strive (Foka Remix)". It's easy to see that there's a strong relation between the two albums, and Hus release serves as the perfect companion piece to "Strive". If you haven't heard that one yet, I strongly recommend you search it out one way or the other because if you like what you hear here, there's no doubt you'll love Tha Connection's latest album as well.

After a nice lil' instrumental intro, the album starts of strong with "Boss Material", which features a perfect example of what it is that makes Hus such an entertaining rapper as well as a vintage gangsta hook from Roc Marciano. The music is dark and menacing with a thumping drum beat and loud bassline with a few repetitive synth chords making up the main theme of the track. The same formula, but of course with new sounds, is also evident on the next track "Diamond Darts" )featuring one of many guest verses by Rozewood) and many other songs on the album. It's minimalistic, dark and sinister and always with powerful drums. I describe the music this way to tell you that if you're looking for beautiful tonal melodies and smooth, jazzy hip-hop there's very little on here that you'll find attractive. This is strictly hardcore New York street hop, as gritty as it comes, and that's the exact reason why it places so high on my list. Hus Kingpin might not be the most lyrical cat you'll find on this countdown, but he's with no doubt a skilled emcee with great mic presence, constantly drawing you in with ill wordplay that weaves together memorable punchlines and addictive hooks. Add to that his slightly nasal voice that sounds great over the type of beats he spits over. There's no mystery that he and Roc Marciano seems to get a long so well, as they do have similiar styles and lyrical subjects, and even a remotely reminiscent voice, with a dead-on flow where each word is articulated and thoroughly pronounced with punch in favor of machine-gun deliveries. So with that in mind it might actually be a rather good thing that Marciano's name is plastered all over the front cover as the album's co-star despite only delivering a hook, some ad libs and one verse, as fans of the Long Island monster's music will undoubtedly be the same crowd of hardcore hip-hop heads that'll go crazy over this joint.

The only song to clock in at over four minutes deserves a mention as it's one of the craziest cuts of the entire year in my opinion. "Pyramid Points" is a driven neckbreaker that sees Hus and frequent collaborator Rozewood spit in back-and-forth fashion; all set over a violent beat by Germany's The Snowgoons who does a much tighter job here than on much of their recent previous credits. This up-tempo banger is followed by the moody low-key remix of "Strive" by Foka, who have Roc Marciano, Smoovth and Hus trade dark street life lessons over a haunting acoustic piano and punching drums. All three spitters have memorable lines, and while Roc in the end have the strongest verse on the LP it's amazing to hear how incredibly well these three sound together - a full LP collaboration with The Connection and Marciano would be high up on my hip-hop wish list. "Boss Material" gets a sequel next, with a new Hus verse that sounds brilliant over the soulful chopped up sample, that's a real counterpoint to the darkness of the first version, and comes in as a little blast of excellence as it's gone almost as fast as it came. Hus' vivid storytelling verse here is a perfect example of his unique style - "On a private beach out in Japan, we spoke the plan/ I soap with the Queen of the boat/ Raised the glass, full of cognac/ Say a toast for the team and how we move in the most/ Venture, forever, only true cause can enter/ Sneak the rat in the club under the leather/ Fly specs, a good jux, a bitch talking nonsense......." Simple, but very powerful and almost cinematic, even.

In true mixtape fashion only three songs on the entire 19 track set has a running time of more than three minutes. This is another strong point of the album worth mentioning, as it doesn't for a moment gets stale as new beats, guests, verses and hooks constantly are being introduced, and luckily enough every single song on here are of high quality, making "The Cognac Tape" a superb front-to-back listen. In fact you might very well be tempted to press play again and start the album all over once the bookend instrumental outro fades out. Very few releases of the year has such a terrific musical flow, and with such a constantly high headnod factor. Although the songs itself would of course sound dope as standalone singles, it's the power of them as a unit that truly brings out the magic of the music. Watch out for Hus Kingpin's official solo album "Sade" dropping late 2013!