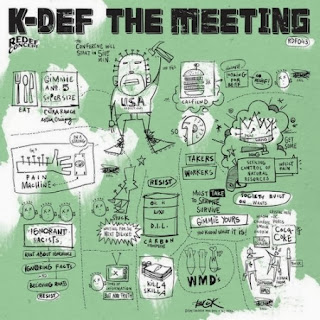 For me K-DEF, along with Alchemist were my two favorite producers of 2013, and I wish I could have written shortly about something like "[Best of 2013] - K-DEF", but I'm just not wired that way. So instead I have picked my two favorite K-Def releases from the year, and first out is his short but very powerful 12" EP "The Meeting". Featuring 8 tracks, with two of them featuring vocal apperances although there's never no question that this is K's show all the way through. First out is the Blu assisted title track, and it's a terrific introduction - from the cinematic string arrangements, to the beautiful sound of the stand up bass, to the calming vibes and that soothing reed instrument that only makes it presence known ocne or twice, and right down to Blu's incredibly sharpely written and delivered verse, closing on the ill line "maybe we should all shine as one body". "The Reason" is a dark and moody piece, that with the returning horn sections and murky bassline is a dense, but very good piece of art. The same can be said about the two following instrumentals - "Goblin Powers" and "Keep 'Em Guessin'" - so much that I'd consider them as part of a unit, or maybe even a suite, which also points to each song on their respective sides being at least loosely connected. The mood never changes that much; it's dark, the bass and drum programming are hard, there's elements of some type of reed instrument on most cuts, but its not at all repretitive because the differences mainly lives in the separation and hardness of the drums, changes in instruments and of course in melodies and tempo. Matter of fact the way this record is arranged and sequenced together so perfectly is the very reason why I have placed "The Meeting" (20 mins) over his mini album and full-lengther this year; although they too of course consisted of superbly interesting material, at least the majority of them. And that's the key word here, because I don't think that neither "One Man Band" or "The Exhibit" is entirely perfect in the way that I would award them a 5/5 rating, but "The Meeting" with its short running time and hyper focus on creating moods is just that. If you ask me, the closest K-Def has gotten this razor-sharp precise would be on his first release with Redefinition Records (a fantastic union by the way), "The Nightshift" which also are a shorter release but also super-focused. "The Meeting" is far from a repetition of that project however. The differences are of course that K-Def was aiming for completely different sounds and feelings on both projects, but there is of course some likenesses as well as K-Def do have a signature sound. You can extend that to both being mainly instrumental projects with two vocal cuts (one on each side) throw into the mix.


The second vocal song on "The Meeting" is a real hardcore headbanger if I ever heard one. Has-Lo, Kaimbr and Insight all does a terrific job over what is, to me, K's finest production on the EP - "Riot Material". An overwhelming composition with extremely hard boom bap drums and a murky bass line, but quite stripped of much more than that during the verses, which adds a lot to the instrumental "hook" where 'Def adds to the pitch black darkness by providing what is nothing short of a stroke of genius. Over the dark and rugged rhythm section the listener are presented to sinister strings which takes center stage, creating an amazing soundbed that evokes the feeling of quality horror music (think Kubrick's use of Penderecki in "The Shining" or Coppola's use of Polish classical composer Wojchiech Kilar for his "Bram Stoker's Dracula"). The hardness of the track is brilliant, but since we've mostly have gotten instrumental projects with a few exception, I think this was something I had been waiting to hear since the equally hard KRS-One track he did for the Marley Marl project back in 2007. Pure excellence.. One last thing about this beautiful gift from K-DEF that I must applaud is that it makes use of so called the bookendings, a technique often used in film and of course books (adding more to the cinematic quality of K-Def's material). Hence, the choice of both opening and closing the EP with the short but powerfull title track gives the record a sense of completion that is much welcome. As expected the vocal version goes first while the instrumental closes shop as we are now on the come down. All in all, this EP keeps you riveted throughout and will without a doubt have you fiending for more, likely even going back to the first track again. 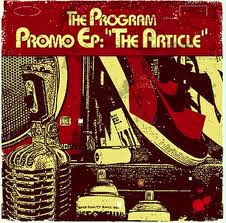 As stated before all of K-Def's output from 2011 and 2013 have with no exception been of pure quality, but there are two-three projects that especially stands out a bit from the rest IMO. The first being '11's "Nightshift" and this year's "The Meeting" EP you just read about above. Needless to say, while all of K-Def's project has been great front-to-back listens, it's in the EP format (20 minutes or so) that he really has created his true masterpieces this last couple of years. Maybe even talking more strongly to me than "The Meeting" is his 8 song collaboration "The Article" by The Program (a duo consisting of New Jersey emcee DaCapo and 'Def). This might not even qualify as a true 2013 release as it was actually first released as a free 128 kbps download via K-Def's and other sites (omitting one of the alternative mixes found on the '13 version) . I listened a lot to the music when it came out and was fairly impressed, and I was hyped as hell that word came in late 2008 that not only "The Article" EP would get a proper release, but a full-length album was on the way (if you look at the original cover posted above, you see that it's listed as a Promo EP). The record had already been given a catalouge number, but was suddenly pulled from the shelves and after away mostly fell away from the true hip-hop connoisseurs consciousness, mine including.

Enter 2013, and Paul Nice's immaculate record label Slice-Of-Spice is on a rice with rare, previously unreleased records by Lord Finesse, K-Def, Biz Markie, Oxygen, and many more - remastered properly and put out on limited 180 grams vinyl pressings. When this was announced as their next project, you know I had to get my hands on this as well as the "Genius EP", featuring four songs not incuded on the original EP. With eight songs showcasing an amazing chemistry between DaCapo's snooth and laid-back voice and delivery, sometimes slightly reminiscent of prime CL Smooth, both in cadence and lyrical topics, and his producer. K-Def presents an unbelivably impressive soundscape that really takes the emceeing way up there to the next level. Since it had never been properly released as a HQ release before, I wasn't really prepared to how fantastic this actually sounded when I put the needle to the grove. This is my #1 K-Def release of the year, and would definitely be in the top 3 of best records released all year (though since it consists of older music I don't want to label it that), as it builds that perfect bridge from what he was doing in 2007 when he still was a producer-for-hire to his more introspective instrumental style heard today. The music is filled with sounds that invokes a strong feeling of nostalgia and longing in me, filled with moody horns, vibraphones, and strong, underlining bass melodies. There's a clear jazz influence in much of the production, don't expect any simple loops as the music is constantly morphing with layers of instrumental sections, often transforming while DaCapo is rhyming. In short K-Def's work here is nothing short of absolute genius, and once again solidifies him as one of my top-5 producers, dead or alive. Something interesting to notice is that "Beggin' Street" makes use of the same sample as one of the tracks he did for Ol' Dirty, but it's incredibly more intervowen with different sounds on here - making it a much better track. You could easily listen to the instrumental version of this and it would hold up just as well as 'Def's other instrumental projects.

And then you of course got DaCapo, an emcee who prior to his work with K-Def really hadn't released anything official as far as I understand, but he rides these intricate beats like it was nothing - something I think a lot of rappers would find intimidating as they "don't sitt still" so to speak. His flow and delivery is calm and soothing, and his lyrical themes is always filled with substance. Instead we get to know the man and what makes him tick as we are invited into his mind and some pressing issues he wants to adress to us as listeners - whether it be on a more personal level like his love for the art of music (the title track), how we need to appreciate people we love, including the musicians we adore, while they still are here ("Fallen"), what's important in his own life and work as a rapper  ("Free Speech"), the way he's seen money change the best of people ("Gotta Get Da Cash"), and so forth. Needless to say whenever he rhyme, he definitely got your ear and with K-Def's production backing him up with some of his strongest production, this is clearly a match made in heaven - I'd go as far as saying that this is a true masterpiece deserving of a 5 "mics" rating. One last thing if you want to hear The Program material as a full album (which I often do), you should follow your listen to the eight tracks of "The Article", with the four tracks on "Genius" and then the three-song maxi single "The Program" (I don't have this on wax unfortunately, but it can be bought from iTunes), and possibly throw in these three joints from their respective Soundcloud pages. Together you get a good idea of how incredible that lost album would have been - perhaps most of them are the actual songs that were supposed to appear on there.
Posted by lost.tapes.claaa7@gmail.com at 10:04 AM