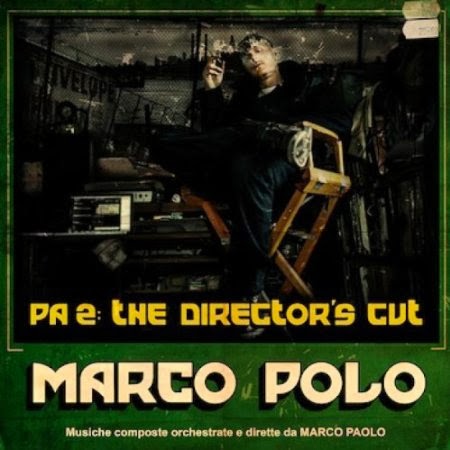 Throughout the years Marco Polo, the Canadian producer, has certainly paid his dues to become one of the most cellebrated beat gurus at the forefront of hip-hop. From his early work in 2005, producing the entirety of Pumpkinhead's "Orange Moon Over The Brooklyn", to outstanding loosies like his work on Masta Ace and Big Noyd's "Do It Man", tracks by Supernatural, Boot Camp Clik, Shylow, Sadat X, and more. Since then the Canada prodigy has developed a sound that might not always be very versatile, but will always get heads nodding and  is clearly in tune what real hip-hop heads expect from a true banger. In this way, his boom bap sound reminds me of the Candian version of DJ Premier in these days, his sound is easily recognizable, but that is his niche and the sound is always excellent. In 2007 he released his "Port Authority" album, a project that really made the world took notice, packed with superb beats and guest rhymes and a few cuts that could not end up any other way than as classics (Large Pro's "The Radar", OC's "Marquee", "Nostalgia" by Masta Ace, and so on...). Since then Marco has sharpened his teeth on producing full albms for up-and-coming artists, or rather artists that's been around for a good while but never got their true shot; making sure these artists got to deliver their finest projects to date (Ruste Juxx's "The Execution", Hannibal Stax "Seizze The Day", and especially Torae's "Double Barrell"). 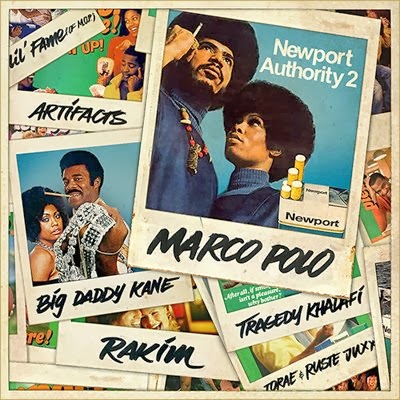 In the meantime he's been hard at work on "PA2: Director's Cut", the true follow up to his debut album (not counting compilations like "The Stupendous Adventures of Marco Polo" and a few mixtapes). In fact he recorded so much material with legendary artists that he was able to create the slamming street album "Newport Authority 2". It has turned out to be the perfect companion piece to "PA2" and in a way it is even more focused, since it's almost twice as short, features previously unreleased incredible joints featuring several of my favorite artists Rakim, Big Daddy Kane, Das EFX, Lil' Fame, Adrian Younge, Tragedy Khadafi, Artifacts, MidaZ The Beast, Large Professor, and a few more. When the singles and tracklist for "PA2" first leaked I said that I would be very suprised if it didn't make the top #3 of my best of the year countdown. While this post is proof that it actually did, I don't think it would be quite so high if I didn't buik it together with "Newport Authority 2", by far the more focused project although the retail album is full of straight up slamming boom bap-esque bangers with some of the finest artists in the game. The only problem is that it's 79 minutes long, and producer driven albums is a special sort of LP; it features incredible production tailored for the artists appearing, but there's no concept at all to talk about from the artist's viewpoint as they are just trying to get in their illest verses over the beats presented to them (there are a few exceptions to the rule, mainly Prince Paul's groundbreaking projects like "A Prince Among Thieves" and "So...How's Your Girl?"). There's also several intermissions and breaks with comedian Michael Rappaport which really becomes annoying and drag on the runnning time even more. I believe that the best album from these sessions would be if Marco Polo had made a 65 minutes album or so, combining the best material from the two projects. However, there's no denying that even on their own, despite some minor flaws on the longer project, there's no doubt that both albums are exceptional 2013 album; both on their own and as a double set including both albums as I have reviewed them.

I wanna touch on a few cuts from "Newport Authority 2" and "PA2: Director's Cut", only to show a small excerpt of the brilliance this 30+ track double feature present. As Rakim is one of my top three heroes in the hip-hop game of all time, I was absolutely flabbergasted about Marco Polo's collaboration with him on "What's Wrong?". Unbelivably, this was actually made during "The Seventh Seal" sessions, and it's totally beyond me why Rakim choose to cut this joint which would without a doubt have been one of the top 3 tracks on the album. But since the release of 1999:s "The Master", the GOD emcee hasn't exactlly been known to always make very logical choice when it comes to create his solo albums. Over one of Marco Polo's most soulful tracks on either of the two projects, backing up the Ra with rock hard drums and a plethora of ill cuts, the legendary emcee spits three inspired verses, full of quotables, and a hook talking about the root of all evil - the green (people always say what the hell does that mean?). An equally impressive cut from "PA2" is the opening cut which to most true hip-hop head's absolute jaw dropping amazement, sees Polo manage to gather Prince Po and Pharoahe Monch for the first time in close to fifteen years. And the chemistry of the beloved Organized Konfusion is still intact which is so terrific, which also made have something to do with the exquisite beat Marco cooks up for "3 O'Clock". It features a beautiful slightly filtered vocal sample, a majestic horn sample, and a plethora of percussive instruments, and cuts, and although it's one of the slower jams on the LP it's also one of the most powerful.

"Astonishing" is one of the hottest posse cut of the year, or how about Marco Polo gathering Large Pro, OC, Inspectah Deck and Tragedy Khadafi (all amongst my absolute favorites) who all perform verses filled with quotables. Shylow's cuts adds a lot to the final product, and the repetitive but steady flute samlple that underlines the powerful beats and additional sound effects. This is followed by "6 Trill", featuring a, this day, rare solo apperance by Last Emperor who proves is still just as dope as he was at the peak of his power. Shylow sets it off with a lil' turntable cut, leading straight to the beat and Last Emperor's vocal performances. An addictive keyboard line sets the stage for the legendary emcee, with low-key strings, and a strong rhythm section, and Shylow's returning scratch hook. The joint is full of quotables as expected - "I'm so rugged, a certified breadth to the public/ personalize death and destruction/ emcees get fried, electrofied trying to touch it/ without a 6 trillion dollar budget...". It's so good to hear Last Emp back at what he does best, over one of Marco's finest beats on either of his 2013 projects. A track will stand the test of time, no question about it.

Following this are "West Coast Love", which breaks up the New York Golden Era type sound that define much of "PA2". Here Marco Polo proves that he's very capable of switching up his sound, creating a real West Coast banger with more chilled-out drums, percussion, synthesizers (to not the classic G-Funk moog synth), etc. while two of the West's illest gets down to business - MC Eiht and King Tee. Another West Coast sounding joint, but more in the psychadelic vein, is Marco's collaboration with Gangrenem "Strange Brew"; Alchemist and Oh No's heavily drug-infused collaboration. Al and Oh No does their thing, much in the vein of what they have been doing on albums like "Vodka & Ayahuasca" but wiith Marco adding his own personal touch of the chaotic murky bass heavy sound of the duo's usual material.

Getting back to "Newport Authority 2", I want to mention two tracks more, although it's an excellent front-to-back listen. With albums like 1995:s "Holdin' it Down" and "Straight Up Sewaside", Das EFX proved to be one of the most original and interesting hardcore acts of the early to mid-'90s NY hip-hop scene. Since then, they have released a couple of rather weak albums and uninspired guest spots before more or less dissapearing from the scene for a couple of years. "BK 2 NJ" proves that Drayz and Skoob still is, almost, as dope as they always was given that they have a proper beat to fully inspire him. This is what Marco Polo serves them up with here, a hard but funky joint filled with scratches (courtesy of the superb DJ Revolution), and a minimalist approach where the bass and drums take center stage. The final track I want to mention, but once again every song on here is extremely ill, is Marco Polo's remix of Adrian Younge & The Delphonic's "Stand Up" (foriginally rom their self-titled album that probably was the best soul album of 2013). Marco Polo shows off his genius by incorporating the main instrumentation and a sample of the main Delphonics parts, adding a agressive boom bap banger and excellent performances by Lil' Fame, and Tragedy Khadafi. Total brilliance!

Together with these two terrific Marco Polo sets, I'm only gonna mention one more song in depth and that is the album closer to "PA2", entitled "Glory (Finish Hard)" which follows another beautiful track dedicated to the late great emcee that was Keith Elam a/k/a GURU featuring DJ Premier and Talib Kweli; making the final 10 minutes of the album absolulely glorious. "Glory" features at least three of my favorite emcees (notice how many times I've said this during this review - the guest apperances Polo managed to get for these LP:s are absolutely unbelivable) - Masta Ace, Posdnous AG. The track is truly glorious and a perfect closer to the 79 minutes journey we've just been taken through. Marco Polo makes a beat that glows of glory and hope, with a beautiful horn section, while Ace, Pos and AG delivers truly memorable verses that you definitely need to hear for yourself rather than me quoting them here.

After having listened through almost eighty minutes of dope beats with non-narrative lyrical apperances by dope emcees can became quite tiresome, despite how dope pretty much each song on "PA2" really is on their own. I would advice you to split up your listening sessions of the album into two different ocassion, listening to half the album one day and the other half the next, or at least take a hour break between each half. I promise you this will enhance the experience. And for "Newport Authority 2", I believe that should be heard as a predecessor, so if you want the full experience, maybe bang that in the morning; in the afernoon you bang the first 10 tracks of "PA2" and when it's becoming night you let the remaining tracks bang out. Of course this is down to personal opinion, maybe you don't have as much problems as me listening to the album in full, and if so more power to you. However you look at it, Marco Polo had 2013 in a real lock and it's clear that both of these projects were a long time in the making (two clear examples of this is the Masta Ace skit before the final track and the info revealed about the Rakim cut). While there have been many dope producer driven compilation albums in 2013 (DJ Skizz's "B.Q.E." and Endemic's "Terminal Illness #2" comes to mind), but no one did it better or more professional than Marco Polo. A producer that has quickly risen amongst my favorites over the last couple of years - he's not the boom bap king, because Preemo is holding down that position, but he's certainly up there. Don't sleep on any of these albums!
Posted by lost.tapes.claaa7@gmail.com at 10:44 AM