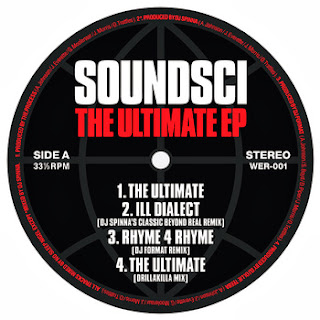 Soundsci is most likely my favorite new group to emerge on the scene during the last couple of years. In 2012 they released their excellent debut LP "Formula 99", which easily made my best of list that year. The group is a quartet consisting of three emcees and two producers, connecting from all over the world to create their unique sound; two producers are from the UK, one emcee is from New York, while two hailing from the ATL. This of course gives them a very unique sound where all of their influences are being fused a long with their own original vision. The recipe has proven to be a great approach to managing to appeal to a large number of true hip-hop heads worldwide; this is of course also due to their shared vision and common influences. Growing up on hip-hop's golden era, all members of the five man unit had had their separate experiences in the landscape of the hip-hop industry as soloists and in various shhort lived groups before forming Soundsci, slightly like the Gravediggaz saga. While all of them found some  success with previous projects, it was when they all came together as Soundsci that they really found their true nisch and became a crew to be reckoned with, and plenty more than that.

In 2013 the group released one EP and one short LP - and I had real difficulties in picking which of those projects I truly felt represented the crew best and should be included in my best of 2013 countdown. "Soundsational" was a truly exceptional project but I realized that I had listened more to the earlier "The Ultimte EP" and therefore it's only right I'll use that one. "The Ultimate" is truly the spiritual successor to "Formula 99", and could rightfully be described as a sort of B-side to that LP (or rather E- and F- sides as it's ideal to put on right after "Thank You"). The EP's A-side begins with the funk-driven title track  which was recorded exclusively for this EP, showcasing the trio of spitters going hard over a breakbeat funk beat that evokes the classic mid-to-late '80s hip-hop. From here the first side of the vinyl features some touched up remixes of tracks found on the '12 debut; most noticeably the DJ Spinna remix of "Ill Dialect". Originally one of my favorites found on the original LP, Spinna's laid-back bass groove melody, low-key horns and superb cuts makes an even finer job of underlining Ox's and A's vocals here - a true masterpiece if I ever heard one. The "Rhyme For Rhyme" remix is again an updated and stronger version of the original song, with a funky breakbeat style beat with some ill cuts and a beautiful guitar sampe taking the center stage beneath the Soundsci teams impeccable rhyme schemes. The only song on the entire 8-track EP that didn't quite cut it for me is the DrillaKilla remix of the title track, which to me only comes off as a lesser version of the original, heard only 12 minutes or so earlier.

However, as I wrote in my original review the real treat of the EP comes with the B-side which is entirely made up of new material - and in my humble opinion these four tracks found here still stands as the finest from the Soundsci catalouge yet. You can tell that the group put a whole lot of emphasis on finding the right sequence for the EP as the songs flow seamessly to create the ultimate listening experience - and especially on Side B that is. As I put the needle on "The Vow" for the first time, I was absolutely flabbergasted from what I heard; The production is multi layered, the drums is head-nod inducing, there's sampled vocal chants throghout and various instruments creating a plethora of greatness that only makes Oxygen, Audessey and U-George's lyrical performances so much more powerful than usual. This continues on "Bon Appetit" and "Lyrical Beatdown", perhaps two more straightforwardly produced, yet they pack an equal punch. The EP ends with the knocking "P.T.U." where Oxygen starts off with one of his finest verses yet, reflecting on how he started to gain fame and recognition, while still struggling to pay the bills, and his desires to be able to get those two things to mesh; Audessey's verse isn't far off in quality, and together with a The Procees beat that knocks hard and incorporates elements like almost chant-like samples, stimulating piano chords, and a beautiful trumpet/trombone bridge with the repetition of A's last vocal into the song slowly closes is simply the work of genius. I own everything this group has put out as a unit so far, and I really love all of them. But with it's short and extremely focused running time, I find that "The Ultimate" is to me their finest release yet. However, I do strongly recommend to check out "Formula 99" and "Soundsational", as well as the EP that set it all off - "Dig For Victory". If you havenn't picked this up yet, there's are a chance that you might still be able to find a copy, so just like with any other of their drops so far I can only say "HURRY UP AND BUY"!

Posted by lost.tapes.claaa7@gmail.com at 1:18 PM