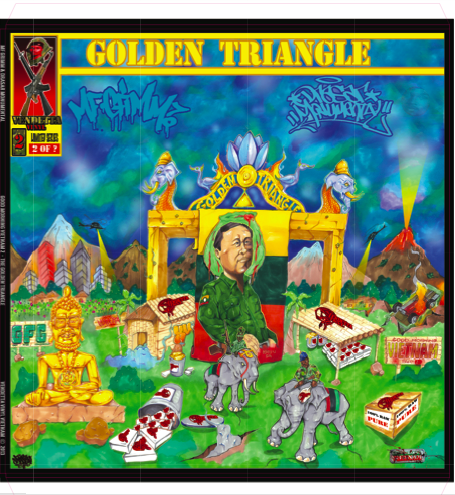 In my recent review of MF Grimm and Drasar Monumental's second collaborative EP, "Good Morning Vietnam Pt. 2" I stated that it was most likely the best album of the year. And here we are, at the 2013 countdown and the #1 spot of the year here at The Lost Tapes is shared between Ghostface Killah's "Twelve Reasons" album and Grimm & Drasar's "Good Morning Vietnam" project. What is different here from my original review, is that I have decided to put the two EP/mini LP:s together as a united record, the way at least in my opinion they are supposed to be heard, although Volume 1 of "Good Morning Vietnam Vol. 1" was released in the last months of 2012, so it might be a bit of a cheat but after having heard this album so many times there's very few times I haven't listened to both volumes as a fron-to-back project; the way I strongly believe they are supposed to be heard. I have an interview with both Grimm and Drasar coming up sometime early next month, which will either confirm or deny this, though I have a strong feeling this is how they are supposed to be heard considering they deal in similiar themes, both lyrical and musical, and "Vol. 2" pretty much picks up where the last track of "GMV.1", "Matula", (GRrimm's truly heartfelt dedication to his aded out. In my mind there's no question that "Good Morning Vietnam" (with its two volumes) should be heard as a true album, which has a running time of 59 minutes and never for a moment get boring. So while this review will focus on both records, if you want to read an more in-depth reviews of the separate records, look up my earlier reviews for "Good Morning Vietnam Pt. 1" and "Good Morning Vietnam Pt. 2". 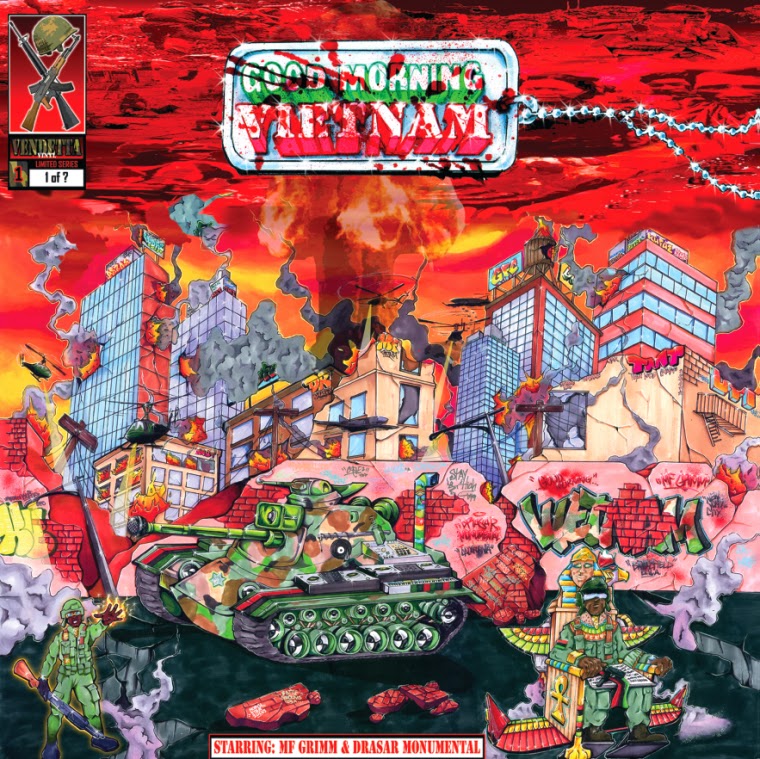 Drasar Monumental is at least for me a relatively new name on the scene; the fiirst I actually heard him was just before the first EP dropped with a few mixtapes including the "Pre-Emptive Strike" mix. MF Grimm, however, has been a long-time favorite of mine - since I heard him on DOOM's "Tic Toc" and then the following 2000 Grimm/DOOM EP, I've been followin his career on and off, and over the last couple of years really intense. The veteran emcee have obviously constantly pushed the boundaries of hip-hop and its formats (dropping a graphic novel; an album created around DOOM's "Spice & Herbs" instrumentals; "American Hunger", the first 3xCD of original music ever released in hip-hop and so on). "Good Morning Vietnam" marks the first time Grimm has worked exclusively with one producer, and also is the first time he has released an album made up from multiple EP sets. I've said in my original review of "Good Moning Vietnam #2" that it was Grimm's finest, most complete and ineteresting release to date as of yet. Grimm has always been a superb wordplay artist with a lot of things to say on a whole lot of topics, but what makes it truly fantastic is the chemistry between him and producer Drasar Monumental. These two share such a chemistry that they could almost been lost brothers at birth, at Drasar pulls out the best out of Grimm and vice versa. On top of that, they are both interested in pushing hip-hop forward while staying rooted in Golden Age-esque hip-hop updated to the modern times. The digital review copies sent out the two volumes together consists of two tracks; one clocking in at about 20 minutes and the other 'round 39. This pleased me a lot as I've always been a champion that album (and EP:s) should be heard as a cohessive whole. With most modern albums this would be a travesty since too many artists are single focused, and can pack a 20 track album with about eight good songs. Luckily, Grimm and Drasar know what they got on their hands - a true qualit product, with not an ounce of filler and also a concept album that needs to be heard from front-to-back.

In my original review of "Volume 1" I assigned it a 4/5 rating, while I awarded the follow-up with the higest score - two ratings I still stand by, but however when listening to the album as a whole 2xLP (and Volume 2 taking up twice the running time of the first) the rating for the project as a whole can't be ny lesser than 4.75/5, which is just about the same rating I'd hand out to the shared Lost Tapes winner by Ghostface. While Ghost's album was entirely free of samples, Drasar Monunemtal not only usees samples exclusively, but he's truly a genius aat manipulatng them. While Grimm often goes from rugged street stories to inrospective lyrics, Drasar is always right there, digging up, and chopping up samples to perfection; never having a problem accomaditing to  the style in qiestion, no matter how contradicting it can ata few times be. While MF Grimm has been a long time favorite of mine, and Drasar was introduced to me to their respective works, I don't at all view this as just a Grimm record. Of course it is, but its just as much a Drasr Monumental album, and one of the two could never have made this brilliant album - which stand as the best representation of both artists work up to this point. In two continuous long tracks you are invited to take a dark journey of war and ghetto rhymes of the two artists own exoeriences in the the US battlefield (whhich stands in for a modern time Vietnam war. The concepts are taken even further than Grimm's lyrics and Drasar¨s agressive pproduction. The listener are constantly bombarded by war sounding sound FX, machine guns, bombs, etc. as well as several movie excerpts relevant to the theme. The second part which introduces the heroin trade between Us and The Golden Triangke. Here numerouss relevvant clips of Denzel Washington from "American Gangster are placed between Digita Underground's classic "Heroine", and other relevant skits. The skits, sepecially on the scecond installment, doesn't in any way take away from the music but at times it does feel like thhey slightly overkill.

Judging the two EP:s as an album is really how I believe it's supposed to be heard. The journey starts wth the impeccable title track "Good Morning Vietnam" and closes with the truly beautiful "Burning Dayight (4 You & Me)". The former tracks starts off with blasting sirens and machine gun fire, setting the listener firmly in the warzone wih a slightly muted sample of a 1965 Vietnam protest song by Country Joe & The Fish's. This leads us to pwerful opening if I ever heard one, a very dark), complex track with severala layers of music and pounding drums. Grimm's "Your triflin' favorie rapper will decipher this/ encipher this/ J watched so may die for/ Studio can't leave spot, pure cheeba/ Haikus rock three lines like Adidas, Jet Jaguar, the meanest/ Possessed by the Midaz bless wiith the righteous .. Enemies get down on knees and bag, I attack like black plague"  further shows his mental state at this part of the project - All out war!


As I wrote in my original review, the final track on the second EP "Burning Daylight" offers something as unique as the artist actually offering a sort of solution to the prooblem that has been presented throughout the album. The problems we have been exposed to by the duu for the latger part of the album , metaphored as NYC as a warzone, can of course not be easily solved and brought in with a solution presented with a nicely tied knot around it. However, Grimm has clearly put in a lot of thought on the first steps to making a better life for you and me, which is very condemnable. The song is really a two track suite; with the first part "What Went Wrong" presenting the problems and asking the question of the title. Grimm begins sammanfatta the problem, getting closer with each verse. "What are we doing, where are we going?", he asks. "Can we repair it, or should we just severe/ Thought we would never , but never say never/ Wasn't clever, secret endeavors/ What went wrong?.. What went wrong?" ... With each bar and verse he comes closer to understanding what went wrong, and how first steps to a better life could be achieved; evidence of a true genius artist, a term i don't throw around lightly. "Tears in my eyes of the dreams we're killing/ Dreams of us building, Dreams of our children/ This track is revealing how I am dealing.. We need some healing, but no one is willing/ I'm having some troubles connecting my feelings/ I'm laying on the floor but hitting the ceiling.. What went wrong?".. And so on.

Then the final track "Burning Daylight" hits, and it is a beautiful musical catharisis to the often somber and agressive music and the vivid hardships of struggling people everywhere. Musically it is the perfect closer - it's an addictive, soothing song with an absolute beautiful vocal sampe, that at times is even integrated in Grimm's own lyrical performance. It's musical and lyrical beauty creates a very wecome contasting counterpoint to the rest on the album, both from a lyrical and soincal point of view. "Sunrise, sunset, stay alive, it's a fight/ Solar energy properly burn daylight/ True redemption in sight, I choose the path that rights/ Few rich, many poor, nothing new under the sun/ Through all barriers, I'll be the one ... Focus on energy, refuse to bring me down /March through hellfire, nothing can stop me now/ Government trying to rock you to sleep, I'm rocking you, rocking you, rocking you", of course meaning rocking you out of the sleep the massmedia and Governmental agencies we are all trying to be put under, and this isnot a US problem only either. "Born to succeed, mind filld with enthusiasm/ finer things in life, not jealous of the ones that have them/ I'm not trying to be offensive but being poor is expensive/ Economy warfare, victory wellshared/ Make a better life for you and me... Never need again, afford better medicine/ Before the lights go out, we can pay Con Edison". A brilliant way to end the best record of 2013, a 19 track journey into the mind of MF Grimm, the unbelivably ill production work by Drasar Monumental and the chemistry these two display together. More need to hear this record, because it  haven't really been featured on that many blogs and don't even think sites like HipHopDX or 2DopeBoyz would do promotion for this. Head over to Vendetta Vinyl ASAP and purchase both EP:s while you still can get them. You won't regret it, whether you're a long time Grimm fan or completely new to both Drasar and Grimm. Excellent hip-hop at this level comes around one or two tiimes in maybe two years, sometimes longer than that, and the least you can do for these guys and their hard workk is supporting their music,
Posted by lost.tapes.claaa7@gmail.com at 3:08 PM