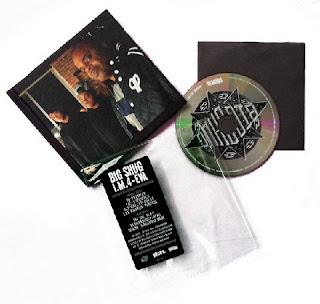 Gang Starr Foundation's own Big Shug is prepared to release his fourth official solo album, "I.m.4.Eva" on July 24 this year. The singles and tracklist is looking like this will without a doubt be one to checking for; besides the album, record buyers also get a hard back, 36 page book chronicle the legacy of Gang Starr, full of anceotes and rare color photos.

Big Shug is more than capable of holding his own on the microphone with his rugged voice and commanding delivery, but a little outside help has never hurt. Featured producers and emcees on the disc include DJ Premier, Fizzy Womack, Reks, Singapore Kane, Slaine, Termanology, M.O.P., Fat Joe and more. Following the previous banging singles, next in line is the Fizzy Wo produced posse cut "For The Real", featuring Reks, Termanology, Singapore Kane and of course Shug himself. All I can say, is that this LP is shapening up lovely, so stay tuned (also check out the expanded tracklist, that now include production credits).