'This is strictly a music blog, you won't find anything here about hip-hop fashion and other non-musical related topics. However., sometimes you gotta make an excpetion which I am doing here, by posting The RZA's long awaited directorial debut movie "Man With The Iron Fist", a movie I've eagerly been awaiting since it was first announced at least two year ago.RZA's been one of my favorite artists since I first fell in love with Wu-Tang Clan's music. I've seen people complaining about him not making that rugge beats anymore, which is true; he's not nearly as good a beatmaker as he was in the mid-'90s, but he still drops a lot of heat in my opinion. He's a very spiritual person today, and you can't make music like you're straight out of the hood, filled with anger and hungr as hell, which was a very important part of how his music sounded - and why it sounds different today. Growth is a good thing for sure, and reading the "Tao Of Wu" which I can't stress enough how much I recommend, whether or not you're a fan of RZA's music or not. 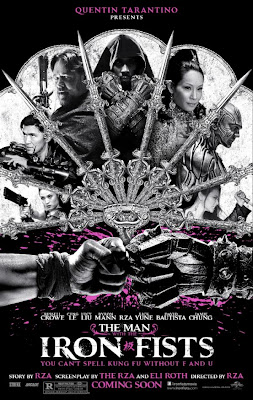 Ever since the late '90s, it seems that his biggest  dream to not yet have been fullfiled, but with "The Man With The Iron First" hae has now fullfiled his goal and dram which is very inspiring. Whether or not the movie is good or not, I am real happy for RZA's sake, one of the best an most intelligent artist in ofhe industry. Looking at the trailer, it certainly does not look like some half-assed shit though, it actually looks very good if you're info flicks like "Kill Bill" and of course the classic Shaw Brothers movies. The movie is scored by, directed and written The RZA, with help from Eli Roth on the script, who also serves as a producer together with none other than Quentin Tarnatino. Stars include Russel Crowe, RA himself, Lucy Liu, Jamie Chung, Cung Lee, Byron Mann, Bruce Yane and Dave Bautista (LOL). I love RZA, an I love Tarantino but I despite Eli Roth and his horrible movies, so I certainly hope he doesn't manage to fuck it up in any way. No matter what, I'm looking foward to this like crazy will see it in the theater as soon as it's released!

That's definitely enough talk about this movie, but I want to finish this writh that the album will feature a lot of new RZA music - not only did he score the enitre piece with Hans Zimmerman, but the soundtrack also features new music by Wu-Tang Clan (including previously unheard Ol' Dirty Bastard verses), The RZA as well as Kanye West, Black Keys and Chemical Romance (whatever). Check the trailer at the top of the page, and to your left you first draft of the promotional flyer. Prepare yourself for the first ever Kung Wu flck!
Posted by lost.tapes.claaa7@gmail.com at 7:53 AM