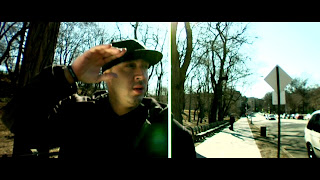 Jorge Alvarez, better known as Kurious Jorge, took the world by storm with his 100% hip-hop, yet weird ass, banging '94 debut "A Constipated Monkey". The East Coast emcee had an unforgettable deliver, filled with humor, lyrics that many didn't even want to touch and slaming beats by The Betnuts family and the SD50's. The album is still remembered today as one of the standouts of the mid.'90s, and the pressure for a sophomore LP was skyhigh.

However, that second effort didn't land in stores until about 15 years later, simply called "II". The LP felt quite outdated in most aspects and despite a few beats by the likes of Hi-Tek, The Mighty V.I.C., 88-Keys and Domingo, the project was a far cry from Kurious debut. Now, the South American rooted emcee has returned again with a new single, enlisting two D.I.T.C. legends in the form of rapper AG an producer Diamond D. Maybe there's still hope for the guy who absolutely molested "?" alongside DOOM on "Operation Doomsday". Check it out for yourself!