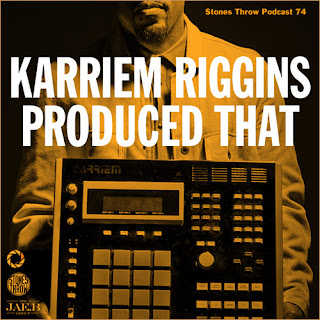 If you don't know the name Karriem Riggins, you definitely need to do your homework ASAP. Next to ?uestlove, he might just be the sharpest live drummer around; playing drums for countless classic jazz and hip-hop artist; Hank Jones, Oscar Peterson, Milt Jackson, Ron Carter, Donald Byrd and even recently backed up piano king Herbie Hancock on his terrific performance during last year's Elvis  Cosstello show. As if that wasn't enough, Riggin's is also a more than capable producer, having laced some mind blowing gems on his MPC; hitting up the likes of Common, The Roots, eLzhi, Phat Kat and Erykah Badu, just to name a few.

Most heads might know him for is his close relationship with the late, great James Yancey, a.k.a. J Dilla, a.k.a. Jay Dee. With both being Detroit, Michigan natives, both Karriem and Yancey have told stories about friendly competition in creating beats, trying to outshine eachother. Riggins' is also one of few producers to have caught placements on JD albums throughout the years. Matter of fact, my introfuction to him was the heavy hitter "The Clapper", the sole outside production on Jay Dee's unbeliavable 2001 debut, "Welcome 2 Detroit". He continued producing and playing drums on various Slum Village records, guest produced a Dilla solo for his unreleased MCA debut a year later. The real proof of the Dilla estate's trust in Karriem Riggins' came when James Yancey tragically passed away as a result of a long fight with lupus and a rare blood disease. For years, he had been working on his second vocal album, "The Shining" which according to those involved was about 75% completed at the time of Yancey's passing. Ma Dukes entrusted Riggins' to complete and finalize the album which eventually was released as a full-length LP in August 2006.

At the moment the producer is signed to the always trustworthy Stones Throw Records, and is one half of the duo Supreme Team together with Madlib. Stones Throw's latest free podcast is dedicated to the way too often overlooked Detroit producer/drummer, in preparation for his upcoming solo album on the label - "Alone Together". Mixed and prouced by K. Riggins, the podcast can be listened to in its entirety free of charge via iTunes, so what are you waiting for?!

KARiEM RiGGiNS - "RiGGiNS PRODUED THAT"
Posted by lost.tapes.claaa7@gmail.com at 8:51 AM