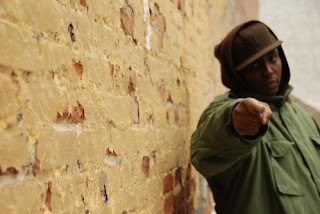 Erick Blaze was born and grew up in Paris, France and grew up around music all his life. His brother was a bass player, and a wide array of different styles were constantly around the young Erick. It was only a matter of time, before he himself started dabbling in music production and other musical ventures, especially after the rising hip-hop scene were starting to make its impact felt on France and its European neighbors. It didn't takle long until the young Blaze made a conscious decision that this was something that would have a profound impact on his life.

At a time during high school he started out as a rapper with a local crew, but soon realized that production was his true forté. Stepping out of the booth, he started concote beats for his crew and friends, and while he did start to get some recognition for his unique musical style, he felt he needed to be closer to the culture and its origins. In 1996, he therefore moved to New York City to try his luck; something that would prove very fruiitful. Eventually, he became a full-blown NYC resident, finding himself connected with a host of legendary underground producers interested in his work.

Beginning around 2004, he encountered interest from several Queensbridge veterans, and in 2004 E-Blaze produced both tracks on the underground classic "It's All Good"/"Right Here" by Kamakazee (feat. Blaq Poet), shortly followed by the rugged Screwball antghem "Fuck Y'All Niggas". The QB connection continued with bangers for Littles/Havoc, Infamos Mobb and one of the final tracks recorded by KL.
What really made him a household name though, was when he became an affiliate of the D.I.T.C. camp, trough legendary producer Showbiz, who was a big fan of Blaze individual sound. Not only did he soon get the chance to produce two classic Show & AG records, but also got the chance to produce half of the highly anticipated OC/AG collabo "Oasis", and many other unforgettable pieces by the likes of Smiley the Ghetto Child, KRS-One, Raize/Killah Priest, and Verse. If you're still not up on Eric Blaze catalouge, now is the time to check it out for yourself; The Lost Tapes present a 20 track compilation featuring 60 minutes of various E-Blaze cuts, which I'm sure you'll enjoy. Aight, let's get down to business - TURN IT UP!!!