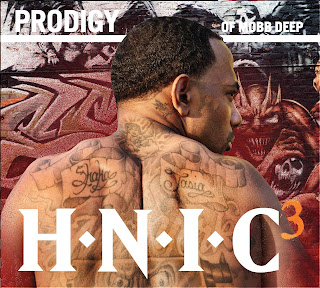 Since Prodigy's release has been released a gang of mixtapes and singles of varying quality. My main issue is that P seem to attrackt new fans by collaborating with new rappers that's far below his skills, rather than sticking to what he does best. With that being said, P still drops some heat satisfying longtime Mobb fans. Next up is the third installment in his "H.N.I.C." series, which hit stores July 3 on Infamous Record. I got mixed feelings about the project right now; out of the three singles we've heard so far, two were very dissapointing ("Gangsta Love", "Pretty Thug") and one absolute FIRE (the Alchemist laced opener, "Without Rhyme & Reason"). It will definitely be interesting to give it a spin though, I still got faith in the Mobb... "H.N.I.C. 3" will also be available as a Deluxe Edition, featuring four bonus tracks as well as a Mobb Deep documentary DVD.