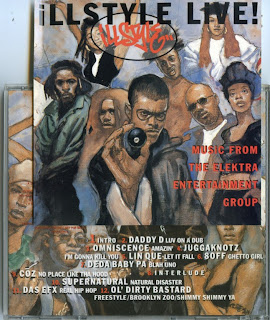 The updates has been rather slow lately, so I thought to bring back a true classic underground tape for y'all. The "Illstyle Live" compilation was released on Elektra in 1995, right before Sylvia Rhone took over Dante Ross' position as the main A&R of the hip-hop section of the label. This was a true shame, as it resulted that numberous dope underground projects got completely shelved and still remains that way. The most known example is of course the InI/Deda albums that Pete Rock produced, but also lost gems like Omniscience LP debut which only made it to the bootleg market (and which I will post soon). Also the original Juggaknots' mini album, releases from Lin Que, Supernatural, 8-Off, and more. Luckily, the live sessions that was the basis for the label's "Illstyle Live" compilation, was somewhat of a special night highlighting what the label could and should have been if it wasn't for Rhones.

It was a special night, with the Elektra artists giving respective performances of stand-out joints from their forthcoming releases, with DJ Pete Rock handling much of the DJ duties. I understand most dedicated hip-hop fans are well aware of this, but for those who don't, you're definitely in for a treat; and The Lost Tapes will also strive to bring you as many studio versions as possible of these gems. Originally known as a promo vinyl release, the good folks at the impeccable T.R.O.Y. Blog, managaed to get their hands on a very rare CD promo which they brought to their readers. This is the version I'm bringing here as the sound quality is so superior, but all props to "dirt_dog" from the T.R.O.Y. blog. Enjoy fellow hip-hop heads; oh and the Ol' Dirty Bastard 22 minutes set at the end is fucking priceless!