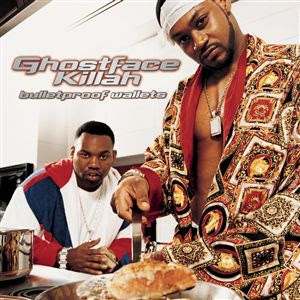 Real Wu-Tang heads know that the final retail version of Ghostface Killah's final album for Epic Records, "Bulletproof Wallets", had little to do with how the project originally was conceived. Label policts, sample clearance problems and even lost sample sources transformed what could have been GFK's third classic LP into a rather mediocre affair; even prompting the emcee to leave the label before his contract was even fullfiled. When it was first released in November 2001, I bought the album but the tracklist on the back cover was a far cry from what was actual on the disc. In fact, this "bogus" tracklist is much more representative of what GFK originally intended. A while ago, I got more or less obsessed with the way Ghost had intened his ill-fated third LP, going over singles, rare promo vinyls, the "original" tracklist on the retail cover, interviews and other sources. I eventually think I came very close to what Ghost originally had in mind, and since then I have never played the retail album again. The original link I posted a while back, has been deleted, and due to heavy demand on a re-up; once again, I present to y'all one of my favorite The Lost Tapes compilations/alt. versions.

Maybe Ghostface nr. #1 masterpiece; the preceeding "Supreme Clientele", was hailed everywhere as a true return to form for the Wu-Tang Clan and their solo releases. It was not fully produced by The RZA, but instead RZA and GFK, who received beats from the likes of Allah Mathematics, Carlos Broady and JuJu to name a few, but the two arranged, co-produced and executive produced all songs on the project to give it a cohessive sound. The same formula was used for "B.P.W.", RZA produced about five beats but he and Ghost picked out and arranged beats by Allah Mathematics, Davel 'Bo' McKenzie, Alchemist, Carlos Broady, and Digga. Some interesting trivia is that the recording sessions fully took place in Miami, featured Chef Raekwon heavily and was even conceived as a sequel to "Cuban Linx...". Maybe due to the warm Miami surroundings, the music recorded ended up a bit warmer and toned down than its original predecessor; needless to say the title was changed to "Bulletproof Wallets". On the original version that I preseent here, Raekwon was however still featured heavily, sometimes spitting full 16:s, i some cases a few short bars and sometimes only a hook or intro.
The album Ghost handed in to Epic in the beginning of 2001 was the perfect follow-up to "Ironman" and "Supreme Clientele". Ghost proved once again that he was one of the absolute top emcees in the game; RZA's production and arrangements were straight up incredible, and it was great to hear Raekwon and GFK back together. Unfortunately, Epic Records managed to fuck up the album quite heavily, switching the track sequencing, and completely deleting some of the highlights like "The Sun" (which Coles recently revealed had to be deleted since RZA couldn't find the original record he had sampled), the memorable concept joint "The Watch", Digga's TV-show theme sampling "Good Times" and replaced the RZA's feel-good track "Flowers" with an almost unlistenable watered down version. The result was that the cohessiveness and album flow was completely destroyed.

So, if you are one of the people that were strongly dissapointed in GFK's third opus, make sure to listen to this from front-to-back. Even if you heard many of the songs before, the sequencing here really adds to the overall experience. One more thing; the outro "Street Chemistry" I believe was a last minute addition, so it's a big possibility that this would not have appeared on the intended version; all tracklists and promos I've seen end with "Strawberry". But it's such a dope jam, and is a great album closer but if you want to keep it 100% let the album end after track #16. Oh well, enough talk, so enjoy, turn it up and WU-TANG for life!

EDIT: Some have suggested that the version of "Flowers" included here shows up as corrupted when unpacking the .RAR file, if that's the case, grab it here.