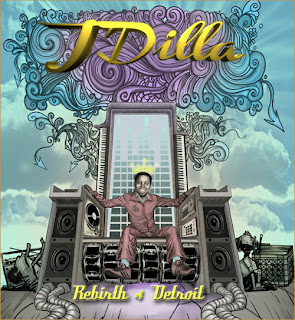 You never know what to expect from a posthumous release no matter how incredible the original artist is. But 2009's Ma Dukes / Pete Rock collaboration "Jay $tay Paid" was a very worthy addition to any true Dilla discographer, and considering the huge amount of beat tapes the late genius left behind him, I have high hopes for Ms. Yancey's supervised "Return Of Detroit" which hit stores on roughly a week. Tne project will feature previousxly iunreleased Jau Dee beats.,as well as rare tracks, mixed and cut up by Detroit's DJ Dez. Features include a host of both established artists and up-n-coming rhymers, all mainly from the "D". I'ma pick this up for sure... The tracklist has finally been revealed, check it out below and pre-order your copies @ UGHH.

1. “The New Installment” (Intro)
2. “Detroit Madness” with Phat Kat
3. “Big Thangs” with Esham
4. “Ride With It” with Tha Almighty Dreadnaughtz
5. “Say My Name” with LaPeace, Moe Dirdee and Seven The General
6. “Detroit Game” with Chuck Inglish (COOL KIDS) and Boldy James
7. “Feel this Shit” with KetchPhraze
8. “City of Boom” with Loe Louis and Beej
9. “Let’s Pray Together” with Amp Fiddler
10. “Requiem” with Allan Barnes (The Blackbyrds)
11. “Do It Right” with Fat Ray, VStylez and Soul Man (A.W.O.L.)
12. “My Victory” with Boldy James
13. “Rebirth is Necessary” with Tone Plummer and Mr. Wrong
14. “DILLATROIT” with Supa Emcee, Nick Speed and Guilty Simpson
15. “Center of The Movement” with 5ELA ft. Pierre Anthony
16. “Pitfalls” with Fat Ray, LaPeace and Loe Louis
17. “Do It For Dilla Dawg” with Illa J and Frank Nitt (CAKE BOYS)
18. “Jay Dee’s Revenge” with Danny Brown ft. DJ DEZ
19. “Motor City Sparks” with Corey Sparks and Beej
20. “House Shoes Was Spinnin” with Quelle Chris
21. “The Best That Ever Did It” with Jon C and Allan Barnes (The Blackbyrds)
Posted by lost.tapes.claaa7@gmail.com at 6:58 AM