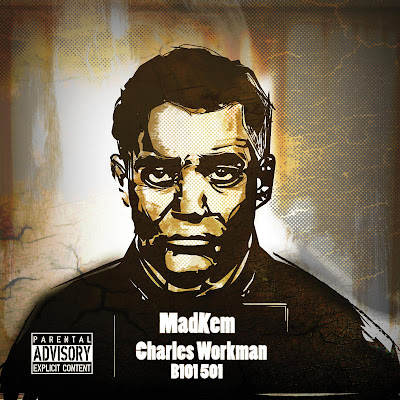 Last year Soulspazm released the great "back-to-basics" debut album "Charles Workman" by talented wordsmith MadKem. In celebration of the LP:s one year anniversary, MadKem, Soulspazm and the crew have decided to let loose of the entire 11 track set as a free download for a limited amount of time via Bandcamp. Included are also a full spread digital booklet, two unreleased instrumentals ("Malcolm Browne" plus "How We Do") and the video for "The Moon", so it can't be anything but a done deal. I wasn't previously aquainted with the Queens rhymer, but this set really hit home with me as it's filled with great stuff that guarantees many future revisits. Not only do MadKem pack a distinct voice and a solid flow, he's coming with some really well written and clever verses. Not to mention that "Charles Workman" is built around a variety of interesting topics spread over the 11 songs. With production from DJ K.O., Madwreck, Analogic, Beatnick Dee, and more, this one comes highly recommended. Make sure to grab it while you can!