PUBLIC ENEMY - "The Evil Empire of Everything"

Only a few months ago, Long Island veteran crew Public Enemy released their eleventh studio album "Most Of My Heroes Still Don't Appear On No Stamp" exclusively to iTunes. Already by the time of that LP:s conception, the plan was to follow it up with another full-length project called "The Evil Empire of Everything", that connects with each other on some planes although they are meant to be viewed separate entities. "They're totally separate albums," Chuck D told Rolling Stone. "But 25 years ago, it probably would have been called a double album. And maybe 25 years ago, it would have been called an extended A-side or extended B-side. But now, in today's digital space, we thought it's very important to be able to slow the listener down. The fact that you work on something, and a reviewer or a listener listens to it on their iPod or their file in about 15 or 20 seconds, it's like, 'Wait a minute. Slow down.'" (Chuck D on P.E.'s two new albums, Rolling Stone, 2012).

"The Evil Empire of Everything" was just released today, and is another iTunes exclusive which boosts features from Ziggy Marley, Tom Morello & Henry Rollins (!), Davy DMX and a few others. Luckily for us few weird fucks that still likes to have our music on vinyl, cassette or CD, Chuck D and the gang will satisfy our needs by releasing both "The Evil Empire" and "Most of My Heroes" on compact disc on November 6. Shouts to Kemal for the information; PE really need to step up their promotion game a few notches! 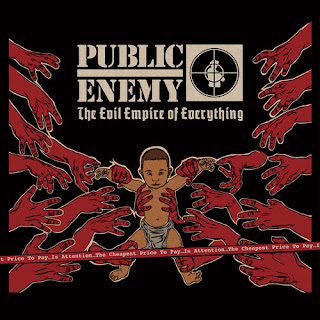