"It's not my job to fix hip-hop, I didn't fuck it up", Bumpy Knuckles a.k.a. Freddie Foxxx boosts on his masterful DJ Premier laced  2012 "KoleXXXion". And damn right he is; his first album back in 1989 might not have been the hottest album, but since then he has always stood out as one of hip-hop's last true purists left, putting his love for the music and culture above any money train any day of the week. "The Kolexxxion" has been one of the three albums I've bumped from beginning to end most all year, just like "Industry Shakedown" before it, and the same goes for the reissue of "Crazy Like A Foxxx". Bumpy's ear for beats are something else; never abandoning the hardhitting boom bap that compliments his flow and lyrics so well, and whether he's working with one of the best producer in the game (and he pretty much worked with all of them), producing the music himself, or grabbing a track from someone up-and-coming, the result is in 90% of the cases straight up heat. Then you got his microphone skills of course; ever since the "Ruff Ruff" days, few rappers in the game has such a commanding voice, he rhymes agressive as hell but never let it interfer with his delivery; Foxxx walks the perfect balance between "punch-you-in-the-face" music and social commentary ("Angels Sing"), politics ("New Millenium"), and self-reflection ("Searchin'"). In other words, just like colleagues M.O.P., Foxxx got a whole lot more up his sleeve than the casual listener aeem to think.

A while back I put together an appreciated compilation of Bump titled "Gangsta Poetry", and since I attended a straight-up superb performance by Bumpy Knuckles and DJ Premier on their KoleXXXion tour yesterday- I just knew I hadt to make a second installment with tracks I don't have on my Bumpy CD:s and LP:s, The show was superior to most shows I ever been to, the energy was crazy from both the audiecence and the duo on stage, and especally Bumpy seemed to love Malmö, even dubbing the entire audience Gang Starr Family haha. Besides great sound quality, Bump and Preem tear the roof down with about 85% of the "KoleXXXion" LP (which really makes for mind-blowing live material), a few classics from '99 like "Who Know Why?" and the timeless "Industry Shakedown". After about 40 minutes Bumpy left, while Preem played some GURU and Big L tributes in the form of a gang of Gang Starr classics (including "Full Clip") before Bumpy returned to the scene again for another 40 minutes set before they both left. I'm still blown away by how great and professional this show was.. A huge difference from the guys who comes out, rock for 45 minutes and leave (Jay-Z, I'm looking at you)... So of course, there's a lot of Bumpy getting played this morning, so why not make it a compilation of non-album material so y'all can enjoy it too, right?!

I call this one "Freddie @ It Again: Gangsta's Poetry V.2" and it includes 18 slamming songs consisting of various guest features, B-sides, unreleased material and soundtrack exclusives... You know the drill! I think it came out REALLY nice, fans of Foxxx will definitely appreciate this, and it's no doubt that this works great as a front-to-back listen as well as a perfect companion piece to the previous "Gangsta Poetry". Just check how it starts with a good qualiy radio rip of a rare Future Flavaz promo freestyle over an unreleased Pete Rock beat, and from there bangs along for over an hour until it closes with Foxxx recent feature on none other than Grandmaster Caz's comeback LP. Besides the intro, there's some great unreleased Pete Rock / Bumpy collabos on here that I think you will enjoy if you missed out on them earllier - tracks like "The Mack", "45 Don" and "U Krazy". As far as Gang Starr family, Foxxx joins Big Shug on two cuts, one of them being a Premier production; M.O.P. joins forces with Foxxx as guests on Wyclef's hard-hitting "Masquerade" and both Lil' Fame and Bump are part of the unbelivable posse cut "Reppin' NY" that DJ JS-1 produced last year. Please support good music, because this guys really deserve it, and if you want to keep hearing well executed projects like "The Kolexxxion" there's absolutely no reason why you shouldn't purchase it - buy music from Bumpy Knuckles @ UGHH, Foxxx @ iTunes or directly from Gracie Productions which now has all versions of "KoleXXXion" on 50% of the price (including the instrumental and acapella LP:s). At least this way, you can listen to "We Are @ War" without feeling like a total sucker haha! But for now, enjoy this highly dope compilation everyone! 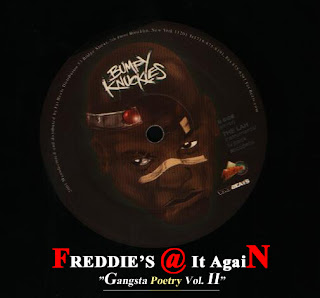 BUMPY KNUCKLES - "FREDDIE @ IT AGAIN"
Posted by lost.tapes.claaa7@gmail.com at 5:56 AM