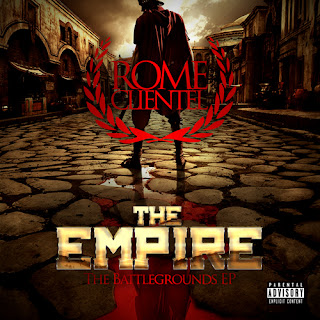 Rome Clientel has been lurking in the shadows since the mid-'90s, even recording with then future legend Just Blaze as early as 1997, but due to various circumstances things didn't work out as it was supposed to go down. But better late than never as the saying goes; earlier this year he released a gang of hype-buildig singles, leading up to the release of his free´ debut EP "The Empire: The Lost Catacombs", that was highly praise among true underground heads. Now, not even a year later, he's back at it again with 10 more cuts collected on the official follow-up - "The Empire II: The Battlegrouds". Can it live up to the hype surrounding it, or was Rome simply a "one EP wonder" who just got lucky? Keep reading and find out...

The project starts off strong with ”The Glass House”; rather than your typical energetic intro track, Rome and producer Mr. Scott settles for quite the moody opening number. Based around electric recurring organ stabs, various strings instruments, horns and a central bass line that is perfect for Rome. There’s no question this recently debuting artist deserves to be called a true lyricist, using the somber meloides and the aforementione deep bass as a canvas to reflect over where he came from, and where he’s going in life, all while sympathizing with his people that's still stuck in the streets though he's refusing to go back. “So why you celebrating for, I’m in the basement, trying to make a name for myself and time’s wasted” is a good example of the first verse, which deals with the past. While “I got to hand it to ‘em, they in the light but the camera’s ruined, fighting for that same slice of pizza like it’s vicodin, I choose another path tryin’ to change life” is a prime example of the thoughts he conveys in the second verse, or as Rome so excellently puts it in his closing bars: “Gotta get it now, we can’t hold back, we fall in the trap when we lie, so it’s time to survive… Let’s make it happen!”


Amongst a few other cuts, ATG produces the soulful, almost mournful “Free”. A beautiful record,  and an early favorite of mine. There’s a few more ATG productions on here, and there’s a few producer/MC constellation that will go down in history; you know the name, but maybe one day we will see Rome Clientel and ATG on that list as well. ATG makes heavy use of haunting vocal samples that run through much of the song, couples it with melodic basslines and somber keys, effect builing horns and an overall nostalgic feeling, that creates an unbelievable chemistry with the emcee in question. Rome takes the opportunity to spit some social commentary, something he does well, speaking on what’s really going on with his people and those still in the street, and how to overcome a bad situation. Rhyming from first person, the Elmira rhymer constructs bars like "Set us free from the demons free as that side of us we’ll never be. From the stereotypes, it’s time to take off som our mask, prepare for the fligh – Until we FREE”. Beautiful stuff with a strong message!

Both “The Crisis” and “My Inner War” are laced by Kount Fif, someone I’ve been keeping an eye on since his excellent work with Killah Priest a few years back. The couple of tracks here does not disappoint, though they don’t quite live up to the two aforementioned unbreakable cuts. The former features guest verses from Rav P and Alias, in particular the latter who spits the most 16 on the entire song; coming in with a story about being in the hospital after a bad set-up by a bride while her guys took all his stuff and pistol whipped him. “The Crisis”  is slightly reminsicnet of Pete Rock's classic "The Game" with its hard-hitting rhymes and array of strings. “My Inner War” is the stronger of the two, both from the musical backdrop and from Clientel's lyrical exercise

Out of the ten tracks featured on “The Battlegrounds”, three songs are produced by ATG, three by Parks, and as mentioned above two courtesy of Kount Fif. This is good since it gives the EP a very coherrent sound, and they all do a good job. Especially ATG, but also Parks who's stand-out tracks are “The Chips Fall”; a banger dripping of ‘70s soul and Motown, set over some real smacking drums. Cleverly disguising his story with poker metaphors, Rome transform the song into a short autobiography, starting from his birth and ending up today, at the beginning of his recording career, where he also speaks about the pros and cons of being in the industry (remember that he was supossed to have come out a long time ago if things would have turned out differently). It’s clear that the song is a motivitional “aim for the stars” type of song, and it works. Parks also laces one of my favorites, the militant “You Want War”; it keeps the soul element but it’s definitely more aggressive and driven than much of the other material. I also have to hand it to him for incorporating a good chunk of turntable work, something that otherwise are missing from the EP. I'm always very positive about the use of scratches in hip-hop music, as you see it so little in the music today, despite it being an extremely important part of the culture. On a side note, I think I hear the name Statik Selektah cutted up here, could it be that he's an uncredited guest or is my mind playing a trick on me?


ATG returns for the impeccable “Betta Luv ‘Em”, where Rome is just having fun with it; like a true pro he’s rhyming intricate but making it sound so effortless. ATG is already establishing a signature sound with the soul laced backdrops, the vocal chops and beat breakdowns juxtaposed against the progressive drums. This can be heard futher on the mini-albums two closing records, the previous released singles, “One Life to Live” and the bonus cut “Troubled Child”. That signature sound is further established here, and I really hope that we one day will get a full project by Rome Clientel signed ATG, because out of all the producers I’ve heard him work work with so far, he is by far my favorite due to the unbelievable chemistry these two share. “One Life…” teams Clientel up with another highly praised lyricist in the form of REKS; a song about striving for your dreams, and in their case to follow their passion as emcees and walk the balance to never sell out while still making sure that their families is taken care of. REKS is another one of the sickest “newer” emcees doing it, but it’s honestly hard to say who had the greatest verse here which is a feat in itself and speaks volumes of Rome's talents. “Troubled Child” was the first single, and is still my favorite; with the high-pitched, sad and nostalgic soul sample, the classic bass ostinato and the melody of the recurring trumpet, this is the album's masterpiece and true stand-out. Just as good are Clientel’s vocals, conveying a sad tale that happens every day, everywhere, about a young child lost in his way, seeking an identity but instead comes across an identity crisis as he goes further and further down the wrong path. Rome's reminiscing on how they used to play basketball when he was a kid, and draws a parell with how it's looking for more and more kids today: “The court is empty now, the kids are having babies/ Getting high and committing robberies at early ages … Selling weed at 15 to feed the seeds, makes it hard to believe [in god]”. The whole song is filled with messages like this without ever getting preachy, and if you ever been a so called “problem child” you'll be able to completely relate to this type of material, and will mean a lot to you.

Conclusiom
As the second EP in less than a year, the second entry in Clientel’s “The Empire” series is also the best. While I really liked the first installment, here you can hear that Rome already has evolved as an emcee, he sounds more confident, he speaks on some terrific topics and tells stories, all while doing it incredibly well and completely natural. Even his ear for beats seem to be a step sharper this time around. Now, “The Battlegrounds” is not a perfect 5/5 album, but it is undoubtedly a DAMN GOOD ten-track set that will warrant many listens. There’s some real stand-outs and there’s a couple of cuts that’s just good but not great - but remember that this is just the beginning of what is hopefully a career of longevity. I believe that Rome will one day have the potential to be mentioned in the same breath as the A-game lyricist of this culture we call hip-hop. There’s not a single weak track on here, plenty of stand outs, and the 30 minutes plays smooth from start to finish and should be enjoyed by anyone who still got a love for that true school / boom bap style that The Lost Tapes feeds you on a daily basis. Of course it’s all delivered with Rome’s personal twist, and upgraded to a 2012 version, but nevertheless the authencity is here and it’s in full effect. Now that Clientel’s got our attention with two sick EP’s (that together totals an album worth of 60 minutes), I hope the next step is a full-length retail album from the man himself. And as mentioned before, I wouldn’t mind if ATG produced the majority of it, as he and Rome clearly bring out the best/the beast in one another. After reading this review, you have absolutely no excuse whatsoever for not giving this EP a chance, so download, stream or whatever, but just press play and TURN IT UP!!

"THE EMPIRE II: THE BATTLEGROUNDS" @ DJBOOTH
Posted by lost.tapes.claaa7@gmail.com at 3:12 AM