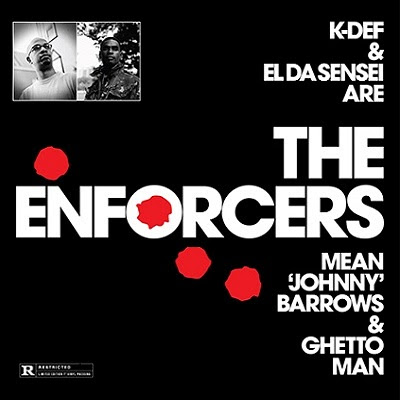 Two of Jersey's most celebrated underground vets is teaming up as The Enforcers for two upcoming Slife-Of-Spice release. K-Def and El Da Sensei was most recently heard together on the recent "Back to Basics" 7" EP, but the fact is that they previously have worked on the classic Sensei joint "Rock It Out", and the lesser known "Enforcers". Given the chemistry, it might not come as a suprise that they has teamed up as the duo The Enforcers (with 'Def taken on The Ghetto Man moniker, while El is referred to as Mean Johnny Barrows). The snippets below sounds absolutely fantastic, despite the clichéd term I can't help but to insert a "real hip-hop" here.

Aiming for a November/December release, Slice-Of-Spice is dropping the first Enforcers release in the form of a 10" single featuring "Give You What You Need" and "The Jersey Connection", instrumentals of both and some fresh bonus beats for the listeners. As if that wasn't enough, this will followed by a full EP from the duo, featuring seven tracks on regular 12" vinyl; and will also be released as an instrumental version.