[Out Of Print] ILL AL SKRATCH - "Creep With Me" 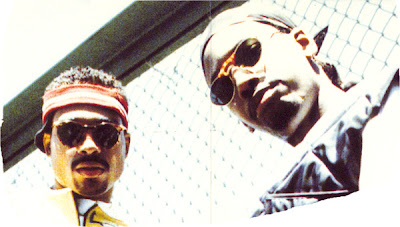 The Lost Tapes is not, and will never be, a "leak" blog in the strict sense of the word; meaning that I don't provide full retail albums for download. Music by hard working artists should be supported by purchase in my opinion, though a compilation of rarer material or a gang of singles could be argued to be promo, and that, along with my articles and interviews, is where this site fit in the blogosphere. Under certain special circumstances I can however sometime post a full retail album, the must is that it's an older LP thati's been out of print for quite some time. And an out-of-print LP is what we're looking into today - a somewhat obscure full-length project by the '90s group Ill Al Skratch. I came across their debut album, "Creep With Me", for a very cheap price in the used CD section a couple of days ago, and as I enjoyed it enough I felt it was good Lost Tapes material.

Ill Al Skratch was a duo that were active between 1993 and 1997, releasing two albums and consisting of emcees Al Scratch and Big Ill. The former made his recording debut as part of said duo shortly before they officially formed and got signed. Big Ill, however, had sharpened his rhyming skills in the late '80s and early '90s as part of the four man group The W.I.S.E. Guys, which also featured acclaimed producer Muffla (a.k.a. Dwayne Simon) of The L.A. Posse. They even released an album in 1989 with the genius title "eF yoU eN Kay E" (yeah no clue whatsoever). It's not a bad album, and probably most interestingly, it features several songs produced by the late Randy Walker, better known as Stretch of The Live Squad. His work with The W.I.S.E. Guys were in fact his first production placements ever.

Both had a passion for rhyming, and even though they were from different parts of New York (Big Ill was from and lived in Brooklyn, while Al Scratch hailed from Uptown), faith would have it that they crossed each other's paths and instantly clicked musically. The evident is heard in the chemistry displayed by the two documented on the records. After forming Ill Al Skratch, and getting signed as a group with Mercury Records, it was time to start building the debut album. I can't say if producer The LG Experience was someone the duo brought with them as a mutual friend, or if he heard the duo and took a liking to their style. What's fact is that his fingerprints are all over the material that became 1994's "Creep With Me". Without exception, LG produced the entire twelve track LP front-to-back, which not only gave it a cohessive sound, but also took it in a really dope direction with its mixture of smooth and hard hitting groove based beats. The vintage '90s bap proved to be a perfect match for the two rappers to bounce off - LG is overall a way to underappreciated producer. In case you didn't know, he's actually the biological brother of Easy Mo Bee, and their respective work can be very reminiscent, so it's safe to say that that the illness runs in the family.

"Creep With Me" doesn't sound dated, but it does sound very 1994, so be prepared to take a stroll down memory lane as it's not only the sound, but it's also built like the typical mid-'90s album with the hardcore street joint, the freestyle track, the ladies song, the R&B guest track, etc. Pounding drum beats, deep bass lines that often take center stage, scratches, vocal samples, horns, occassional organ stabs... You know the drill. Fans of the golden era will probably find this a gem that should be of interest if you are not already acquainted. An interesting point of note is that everything heard here is not strictly sampled as many of the basslines were played live by LG, and LoRider; the latter who played a pretty large role in the sound and provides the occassional keyboard and guitar parts. I would say that "Creep With Me" is really a quartet offering - you got Al Skratch and Big Ill holding it down on the emcee side, but it's The LG Experience with LoRider and their production that make sure the funk and headbanging is constant. And while it's not one of the best albums of the fantastic year of '94, it sure as hell is a nice listen that is rarely mentioned at all. The same goes for the emcees themeselves - while they are not KRS-One material, they make LG's smoking backdrops definite justice.

Now, since it's out of print, I'm adding a link for y'all below; chances are you, just like me, will be able to find it easily in a record shop under used albums, and if you really like what you hear, check out sites like Amazon or eBay... So without further due, grab the album and learn why Nas' gave them that shout out on "Where Are They Now?", and yo TURN IT UP!! 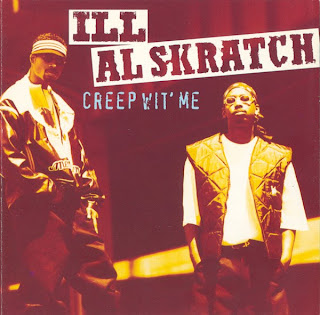