Scritti Politti is an experimenta british band that got their break with the late '70s New Vave/post-punk era, who has tried their hands on most any genre you could imagine. One thing they are NOT, however, are a hip-hop group in any way, shape or form; which is exactly what's make their "Tinseltown to Boogiedown" so brilliant; in fact, it's one of the best singles of  '99. Luckily, they don't themeselves try their hand at rapping, instead settling for the chorus and production while inviting The Mighty Mso Def to do the session and performs a lot more than just a simple 16 bars verse; add to this that his verses were recorded around the time as his lyrical masterpiece "Black On Both Sides". The other emcee on the song is a Lee Majors. But the most interesting part of this late '90s 12" is the high-profile remixes; Psycho Les, Ali Shaheed Muhammad, Pete Rock, and Rob Swift! If you're striving to get your hands on this, this is the definite version and features all versions and its instrumentals besides the original mix which can be heard above.

Often referred to as the king of the remix, Pete Rock's interpretation of "Tinseltown" is filled with all of the typical qualities of "another Pete Rock remix"; it's soulful but with an hard edge, and sounds very close to perfection when coupled with Mos' parts..Equally stunning is the darkerm, sinister variation provided by Psycho LES, who incorporates a violin sounding synthesizer effect which becomes the songs theme, while amplifies the drum beat several notches to give the joint a real booming vibe. This might actually be my favorite out of the five versions of the song! Not unexpectedly, Tribe DJ and producer Ali Shaheed goes for a smoother sax-driven feeling by emphasizing the soul elements of the original, giving it that vintage The Ummah sound. Few versions of the single included all four versions, and the one most often left out from pressings was The Rob Swift variation, which is real heavy on the low end and percussion, and is guarantee to have your head bopping.throughout the entire record. ..  On the suject Speaking on Swift, if you have yet to hear "The Architect", the time is now!

I'ma let the music speak for itself now, I just find it amazing how well worth the price a 12" single like this is. Too often, artists release a single featuring the main song that also appears on his/her album, backed by instrumental, clean and acapella versions of the main track. An exclusive B-side or two such as a remix or a previously unreleased song/s shouldn't just be an option, but a law! With that being said here's Scritti Politti, Mos Def, Lee Morgan, Pete Rock, Psycho LES, Rob Swift and Ali Shaheed Muhammad. TURN IT UP!! 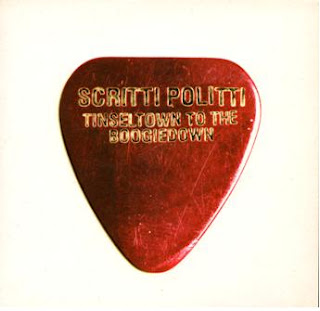