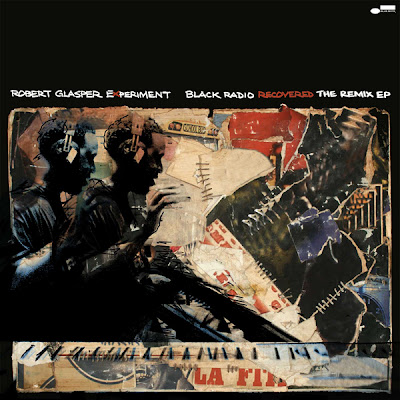 Blue Note's new flagship artist, the pianist and composer Robert Glasper is by far one of the most interesting things to happen in the jazz world at the moment. For his fourth album, "Black Radio", Glasper has left the more traditional piano trio vintage jazz music for an eclectic fusion mix of hard bop, jazz fusion, hip-hop, soul and R&B. Now that the full-lengther is starting to sink in, Glasper invites some of his favorite producers to reinvision some of the cuts from the album for "Black Radio Recovered Remix EP". With a total of six tracks, this week will see Glasper release one cut through his Soundcloud page each day, culminating with the non-album track (although the original was featured on an earlier album from the pianist) "Dillatude #2" on Monday 8.

Check out half the EP below, and the other half will be posted on the date mentioened above. The tracks released so far include a Pete Rock remix of the Yasiin Bey/Mos Def assisted title track; a 9th Wonder version of the Erykah Badu featured "Afro Blue" (possibly my favorite joint from the original LP), which also includes a brand new verse from Phonte; and last but not least Georgia Anne Muldrow's envisioning of "The Consequece of Jealousy" with vocals by Meshell Ndegoeocelle. Be on the lookout for remixes by ?uestlove and Glasper himself featuring Black Milk. Gotta love stuff like this that basically comes out of nowhere!!